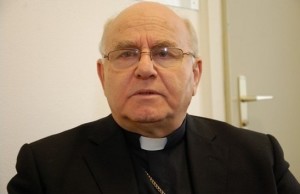 The desperate suffering of people in Aleppo is graphically described in a message by the Syrian city’s Melkite archbishop who underlines how the people urgently lack the means to survive – water, electricity and shelter.

In a message marking his twenty years in the role, Melkite Greek Archbishop Jean-Clement Jeanbart of Aleppo recounted the “unprecedented humanitarian disaster” which his city is grappling, lying on the frontline of Syria’s conflict.

“When all is said and done, these last three years I had to forget that I was 70 years-old and to run to wherever I could in order to lighten the load that is weighing down my beloved people, with financial support for those left without any means,” the Archbishop writes.

He then lists the city’s acute shortages – schools, food supplies, medical care, fuel to make it through the winter months, shelter for the displaced, repair of damaged homes, water supplies for families and the installation of small water tanks in the poorest households.

The letter, which was sent to Aid to the Church in Need, continues “At this very moment, bombs are raining down on the residential neighbourhoods of the city. There may be as many as 60 dead and 300 wounded. Three months ago I had to move out of the archdiocesan residence after it was heavily damaged in the bombing.”

Lamenting the destruction of much of the city’s ancient antiquity and infrastructure, he said “It is four years ago today that my mission changed directions. Comforting the people and encouraging them to persevere has become an indispensable effort.”

Aid to the Church in Need is working closely with Archbishop Jeanbart and other Church leaders and Sisters to provide emergency aid and pastoral help both for people in Syria and refugees in neighbouring Jordan and Lebanon.

At ACN’s request, Archbishop Jeanbart is to be the keynote speaker at the launch of Aid to the Church in Need’s Persecuted and Forgotten? A Report on Christians Oppressed for their Faith 2013-15.

Archbishop Jeanbart will give a personal account of daily life in war-torn Syria at ACN’s annual Westminster event on Saturday, 17 October in Westminster Cathedral with Mass at 10.30am and talks afterwards in the Cathedral Hall.

Other speakers include Fr Douglas Bazi who survived torture in Iraq and who is now coordinating ACN relief work there and teenager Victoria Youhanna, who escaped Islamist terror group Boko Haram in northern Nigeria.