Synod on the Amazon opens with papal rebuke to mockers 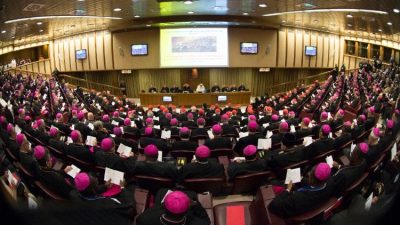 At the first General Congregation of the Synod on the Amazon on Monday, Pope Francis warned the 268 participants that “a Synod is not a parliament” and that the process is not about demonstrating “who has more power” or “who has the majority”.

The Synod will continue until 27 October. The theme is ‘Amazonia: New Paths for the Church and for an integral ecology’.

Ahead of his opening address in the Paul VI Hall, Pope Francis took part in a procession from St Peter’s Basilica, through the Arch of the Bells, and  into the Synod venue.

The Pontiff’s opening address was delivered in Spanish. In it he spoke about the Synod’s four dimensions: pastoral, cultural, social, and ecological.

In a strong rebuke to those who made “mocking comments” about the feathers worn by an indigenous man who brought up the offerings at the Synod’s Opening Mass in St Peter’s Basilica on Sunday, Pope Francis challenged the mockers, “what difference is there between wearing feathers on his head and the biretta used by some officials in Vatican Departments?”

The Pope warned participants, “We have not come here to invent programmes of social development” aimed at keeping cultures in a museum. We are here,” he said, “to contemplate, to understand, to serve the people”.

A Synod is “walking together under the inspiration and guidance of the Holy Spirit” he stressed and added that the Holy Spirit is the protagonist of the Synod who needs “to express Himself among us, with us, through us, and despite us”.

He urged participants to “reflect, dialogue, listen with humility” and speak with parrhesia or courage.

To participate in the Synod is “to enter into a process”, he said, not just “to occupy space in the room”. We need to be respectful, he added, and to be prudent in the way we communicate, not to spoil the Synod process by creating conflicting messages: “a Synod from the inside and a Synod from the outside”.

Concluding, Pope Francis appealed to delegates, “let’s not lose our sense of humor”.

The opening of the Synod comes almost exactly two years after Pope Francis announced his decision to hold a Synod on the Amazon in October 2017.

At the opening Mass on Sunday, Pope Francis invoked the help of St Paul, “the greatest missionary in the Church’s history” that he would “help us to make this ‘journey together’”.

Ahead of the synod, a listening exercise involving 87,000 people in the Amazon took place.

The synod will produce a document on its deliberations for the Pope who will then produce his post-synodal text.