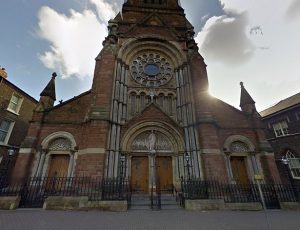 A 92-year-old priest was saying his office in St Patrick’s Church in north Belfast when an attempt was made to set the church on fire by igniting curtains surrounding the ‘door of mercy’.

Bishop Noel Treanor of Down and Connor said he was “shocked and appalled by the suspected arson attack” and that “This criminal action is a violation of the sanctity of the church and an attack upon the local community that has caused significant damage to the property and left the local congregation distressed and deeply upset.”

He added that “Places of worship hold deep significance for the entire community and for their congregations and they should not be targeted”. He paid tribute to the local fire service which arrived very quickly on the scene to bring the fire under control, preventing further damage to “this most beloved place of worship in the heart of the city of Belfast”.

According to the diocese of Down and Connor’s communications officer, Fr Eddie McGee, the arson attack came out of the blue even though the church has been a sectarian flashpoint in the past, especially following a controversial incident outside the building during the 12 July parade in 2012.

“There have been a lot of disputes in relation to the parades so the church got a lot of attention over the years,” said Fr McGee, but it was too early to look at any motivation for the attack, he said. “There could be all sorts of reasons,” he told CatholicIreland. 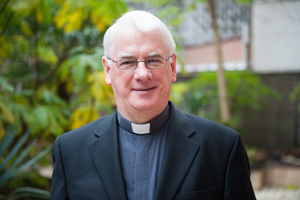 The arsonist set fire to a set of velvet stage curtains which had been donated to St Patrick’s Church by St Kevin’s Hall to embellish the ‘Door of Mercy’ at one side entrance at the back of the church for the Year of Mercy.

Fortunately the curtains, valued at £10,000, had been treated with a fire resistant substance which ensured that the fire did not advance. “Thankfully it didn’t spread, although there is some smoke damage,” said Fr McGee. Local people have been busy cleaning away the smoke damage so the church could be returned to public use. Meanwhile, outside the church, renovation work continues on the spire and facade.

The arson attack happened around 5.30 pm on Monday evening in the porch of St Patrick’s Church in Donegall Street, as retired priest Fr Brendan Magee was saying his office at the front of the church. The fire alarm went off, alerting the priest and other people to the fire. When fire fighters arrived they found the 25-foot-long velvet curtains were alight. There is no CCTV at the church, but there are cameras in the vicinity, which it is believed the PSNI will scrutinise.

Meanwhile, Fr Eddie McGee said the priests and parish community have received great support and offers of help, not just from within the Catholic community, but across all the churches. “There are no indications that the attack was political or sectarian in motivation,” he said. But he warned that actions like this were “not only potentially destructive” to a building but could be dangerous to the people using it. “This happened at five o’clock in the evening when the church would have been open and people would have been in saying their prayers, as this priest was.”

St Patrick’s Church is a well-known landmark in north Belfast, with some outstanding artwork. In May 2015 Prince Charles and Camilla, Duchess of Cornwall visited the church.