Home > News > Call for diplomatic efforts on Syria to be redoubled

Call for diplomatic efforts on Syria to be redoubled 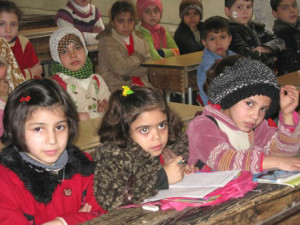 Aid to the Church in Need (ACN) has pledged $2.8 million to help Syria’s Christians as the aid agency Concern warned that the situation within Syria continues to deteriorate on a daily basis.

In a column in The Sunday Business Post, Brid Kennedy, Concern’s regional director, reported that Syria now has the largest displaced population in the world with 7.6 million people who have moved from conflict areas within the country.

Another 3.8 million have moved to neighbouring countries.

“We must not look back in 20 years’ time and wonder why we didn’t do more to help,” she wrote.

She called for a political solution to be found with redoubled diplomatic efforts.

Until such a solution is found refugees and displaced people must be given food, shelter, water and education.

However, last year the international community only funded 58% of humanitarian needs. Pledges of aid were made by more than 40 donors but not all were met.

Ireland deserves more credit that others ‘for largely honouring its pledge” she wrote.

She highlighted how unfair it is that the five neighbouring countries to Syria who host the refugees (Lebanon, Turkey, Jordan, Iraq, and Egypt) and as a consequence are running out of resources.

Aid to the Church in Need (ACN) has highlighted the plight of Christians in Syria and pledged $2.8m to help them.

The charity is providing 4,500 vulnerable families with funds to buy oil, gas electricity and rent for four months in various cities as well as the countryside.

It is providing medical supplies for communities in Aleppo and Hassake for six months; paying for repairs and fuel at six schools in Aleppo and Damascus.

In keeping with its core work in countries where Christians are under pressure ACN is supporting local Churches in the repair of badly damaged or destroyed infrastructure — churches, catechetical centres, and diocesan offices amongst other projects.

ACN stated that Christians in Syria have benefited only to a limited extent from relief provided by the UN and other large, secular NGOs.

This is because they are reluctant to register with aid agencies (and identify themselves as Christians) for fear of extremist Muslims who persecute Christians for their faith and their perceived support of the Syrian regime.

Relief efforts have also been curtailed with the fighting and the rise of ISIS.

Fr Andrzej Halemba, the head of the organisation’s Middle East section, expressed the concerns of local Church leaders saying, “Aleppo’s Christians are afraid that what happened in Mosul will also happen to them. This is a new and, unfortunately, justified fear of religious cleansing.”

“The Islamic State openly shows its murderous intentions against anyone who does not bend to its brand of extremism.”

Fr Halemba said that the international community — aside from confronting the threat of ISIS — is drifting and neglecting the Syrian crisis. He warned that some 5.6 million children are directly affected by the war and 3 million students are no longer able to attend school.

Another church leader in the region, the Patriarch of Antioch of the Greek-Melkite, His Beatitude Grégoire III told Agenzia Fides, that he rejects the idea that the suffering inflicted on Christian and other communities by jihadists justify military intervention by international bodies.

“We are a sovereign country with a legitimate government, which is responsible for protecting its citizens. If one really wants to put an end to the tragedy of the Syrian people, there is only one way: stop wars, weapons, money and stratagems used to attack Syria,” he said.

On 16 March, he attended a vigil for peace in the Cathedral of the Assumption of Mary in Damascus, which was attended by representatives and delegations of all the Catholic and Orthodox communities.

“We shared songs and prayers of penitence and peace,” said the Patriarch, “showing all, even in this way, that Christians are the true promoters of peace in Syria”.

He added that the way to promote peace that the Church must constantly indicate “to all men of good will” is that of prayer and the support offered to all that can help to stop the flow of weapons that cause bloodshed in the Middle East.