Home > News > Ecumenical service for people of the Philippines

Ecumenical service for people of the Philippines 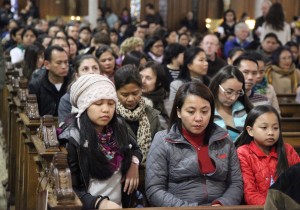 Those who died and those whose homes and livelihoods were shattered by Typhoon Haiyan in the Philippines were remembered yesterday at a special Ecumenical prayer service in Dublin.

There are 10-15,000 people from the Philippines living in Ireland and some of them were present in the Pro-Cathedral when Archbishop Diarmuid Martin spoke.

“I think of you here in Dublin who are so far from home on an occasion like this and who live with uncertainties about your families and friends.”

“We gather to remind you that the people of this country are with you and will continue to stand by you,” he said.

He said the service was “just a small gesture of solidarity” with the Philippines in their time of distress.

The relief effort is ongoing and at the start of December, Ireland dispatched a further 16 tonnes of supplies to the Philippines.

Water and sanitation materials will help to protect vulnerable communities against disease in the worst-affected areas.

Today, Oxfam begins distributing 400 tons of rice seeds in six rural areas south of Tacloban so farmers do not miss the next growing season.

With the support of the charity, they have been rushing to clear fields and irrigation channels of debris from the typhoon. Some 10,000 sacks of seeds will be given out and for each sack around 80 sacks of rice will be harvested in the first quarter of next year.

In a blog published yesterday (11th December) Lan Mercado, Oxfam’s Deputy Regional Director in Asia wrote: “One month on, close to 2,000 are still missing, 5,670 are recorded dead and the number is rising.” 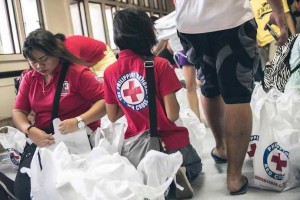 Efforts to reach another 400,000 households are underway.

About 80% of people in Tacloban City now have access to clean water, while about 60,000 hygiene kits have been given out. This and other help is helping to keep families alive, and preventing outbreaks of disease, as well as rebuilding livelihoods.

There is a long way to go especially in remote areas which have to depend on local charitable initiatives. So there is still hunger and malnutrition.

Lan Mercado wrote that President Benigno Aquino’s three-phase plan for recovery and rehabilitation was a welcome one, as it “signaled leadership.”

The plan focuses on shelter and reconstruction, power restoration, livelihood and employment, environment and resettlement, psychosocial care, and resource generation and allocation.

There will be some efforts to ensure that the reconstruction will help reduce storm damage in the future with stronger buildings and possibly no-build zones along foreshore lands which are most at risk in typhoons.