Focusing on ‘sustainable fashion’ and the resale of vintage and previously-owned clothes, the event came about as part of ‘a complete change of heart’ experienced by the owner of the Belfast Fashion Week brand, Cathy Martin.

Martin says she became increasingly aware of the problems created by ‘fast fashion and mass consumption’ while teaching about sustainability in fashion during a summer programme offered by Condé Nast College. The college is part of the publishing empire that produces Vogue magazine, described by some as ‘fashion’s bible’. Martin says she was also inspired by the book Fashionopolis by Dana Thomas. 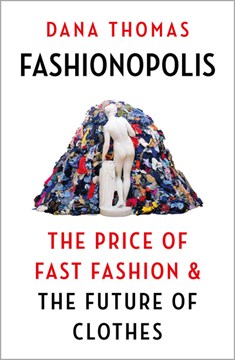 Fashionopolis – a book describing the harm caused by fast fashion and rampant consumerism.

‘I’d previously worked in the textiles industry around 15 years ago, so had seen the massive amounts of water, dye and energy used to create fibres and fabrics, but if I’m honest I didn’t really consider the end game and the massively damaging effect on the environment so much, until recently,’ Martin said.

‘I did some research and got myself educated on the pollution caused and some really unethical production practices within the fashion and textiles industries (particularly some ‘fast fashion’ producers, but some top end design houses are guilty too – the great Burberry burn-off is a good example here.). I also woke up to our over consumption and the constant need for new. I’ve been there. I’m guilty.’

Martin believes that when it comes to a sustainable future, the clothes industry must consider taking on some of the characteristics of ‘the rental and shared economy’.

She said: ‘It is estimated the shared and resale fashion economy is set to boom in the next 3-5 years. The growth of resale — especially online with sites like eBay, dePop, HEWI and Vestiaire Collective, among others — has been one of the biggest shifts in retail in recent memory. Rental sites are growing too, as the shared economy starts to make waves in fashion. And that shift shows no signs of slowing down.

‘Events like our ‘Resale Rail Sale’, in St Anne’s Cathedral, help to increase awareness of the bigger issues of fashion and textile’s eco-damage, and help show how reselling/buying second hand can help to balance out what’s been done and prevent further extensive damage.

‘I’ve been selling, browsing and buying on eBay and in charity shops for over a decade, but want to help further normalise shopping second-hand for fashion and provide a platform for those who want to join me.’

Among the 70 clothing resellers taking part in the event yesterday were entrepreneurs operating vintage clothing boutiques as well as charities like the Society of St Vincent de Paul and Oxfam, who operate networks of second-hand stores selling pre-owned goods.