Home > Featured > ‘Her death is a huge cross for her family’: Bishop

‘Her death is a huge cross for her family’: Bishop 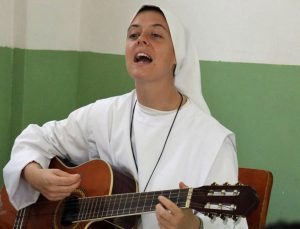 “It is not the way things should be that parents bury their children,” parish priest Fr Eamon Graham told mourners at the funeral of Sr Clare Crockett, the Irish nun who was killed in the earthquake in Ecuador.

The 33 year old Derry native died along with five postulants of the Servant Sisters of the Home of the Mother when a stairwell collapsed on 17 April as they were attempting to escape their school building in Playa Prieta.

They were among the 520 people to lose their lives in the tragedy.

In his homily, parish priest Fr Eamon Graham told Sr Clare’s family, relatives and friends who gathered in the Long Tower church that her death had thrown up many questions about God and his ways for all of them.

“One thing that has emerged” Fr Graham noted, was the insight they had gained into Sr Clare’s life and motivation.

“So many people seemed to know Clare, so many people have been touched by her,” he said and added “We have all been inspired by her faith and witness. Always expressed in her Derry directness and always lived out with joy and enthusiasm.”

He said she was “a striking example of Derry womanhood”.

“Clare asked herself what could she do to make the world a better place and how could she serve God through the most vulnerable.”

“She clearly did this in an exemplary manner as a religious sister nourished by prayer and especially through the Eucharist but she did it above all as a woman who never forgot her Derry and her Brandywell roots.”

Bishop Donal McKeown of Derry, the retired bishop of Derry, Dr Edward Daly, and Bishop Kevin Doran of Elphin presided at the funeral which was concelebrated by ten priests.

The Gospel chosen for the Mass was from St John and was chosen because it was one of Sr Clare’s favourites. It recounts Jesus relating how there are many rooms in God’s house.

Fr Graham concluded his homily by saying he liked to think that Clare is looking down from a window of her father’s house.

A guitar was among the gifts offered during the service. Speaking ahead of the funeral Mass, Bishop Donal McKeown told reporters, “I understand she was found with the guitar cord round her neck, and in many ways that’s the image most of us have seen of her over the past few weeks.”

Thomas Gallagher, who knew Sr Clare before she entered the order, and had travelled with her to Santander in Spain where she was first introduced to the Servant Sisters of the Home of the Mother told CatholicIreland.net that when her body was found in the rubble of the earthquake it was discovered that Sr Clare had been killed as she was opening the door to usher out those she was with in the school building in Playa Prieta.

In his tribute to Sr Clare at the end of Mass on Monday, Bishop Donal McKeown said the young nun had, like Jesus, died young. He said that “because of Jesus we believe that a life given in loving sacrifice is never wasted”.

The Bishop of Derry said her death was “a huge cross” for Sr Clare’s family.

“Photographs are beautiful but little compensation for a real human voice that is no longer with us, a face that will no longer walk in the door, a smile that her some young members of her family will never know.”

But Dr McKeown stressed that her ministry did not die with her.

“Her life and death have posed questions for many of her contemporaries – what is worthwhile doing in life, what makes a beautiful person, who we want to have as our idols?”

He emphasised that in our culture today, we are invited to stop dreaming. “Realism, cynicism and despair are in vogue. We have been sucked in by a cynicism which confuses despair with realism.”

Sr Clare had seen heroism and idealism alongside loss and betrayal in the city where she grew up.

“What held – and still holds – communities together in terrible times were the strong men and women and the strong community ties that would not be crushed by violence, loss and a seemingly hopeless future.”

He added, “The mission of Christ’s Church in this diocese is not to tell people what they can’t do – but to tell them of Jesus’ dream for what they can become.”