Stop the genocide, says priest in appeal to Nigerian government 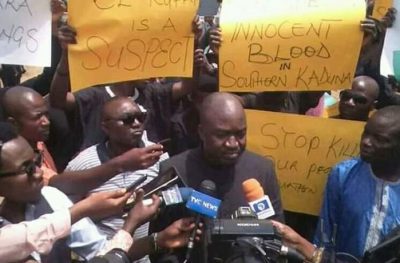 ACN says that Fr Williams Kaura Abba, a priest working as the coordinator of the Coalition Against Kajuru Killings, has called on the Nigerian government to intervene to protect the Adara people.

The priest accused the Governor of Kaduna State in Nigeria, Nasir Ahmad El-Rufai, of colluding in the attacks.

A speech given by Fr Abba during a demonstration last Tuesday in Nigeria’s capital city, Abuja, is reproduced in full on the Nigerian Insider News website. In it, Fr Abba said that the current spate of killings started on 10th February, when “without any form of provocation” herdsmen militia carried out an attack that led to the death of 10 Adara people, including a pregnant woman.

“To our shock and consternation, not a single word over the killing was issued by the Kaduna State Government,” said Fr Abba.  ”Five days after the attack, on 15th February, Governor Nasir Ahmad El-Rufai, on National Television, disclosed that security agencies had recovered bodies of 66 Fulani killed by Adara natives. He was later to increase the death toll to 130.

“The governor’s allegation over killings of Fulani is still an allegation that is yet to be proven, as he has neither shown the world the pictures of recovered Fulani corpses nor commenced investigation to prove his allegation. The Kaduna State Police commissioner recently debunked the death toll as announced by the governor, insisting that investigation into Fulani killings is still at an embryonic stage.”

Since the governor made his, so far unfounded claims, the Adara people have been subject to repeated attack, said Fr Abba. “The allegation by El-Rufai over killings of our brothers of Fulani extraction set the stage for reprisal killings and weaved the labyrinth of insecurity over the besieged Adara communities such as we are currently witnessing. Within the space of one month, we have been horror-stricken at the barbaric attacks carried out by these merchants of death against children, men, women, including the aged. Communities have been reduced to rubbles and insecurity now stalks these towns and villages unchallenged.

“The latest death toll of this mindless carnage has already surpassed 130, with several communities reduced to rubble: setting the stage for a major humanitarian crisis that has so far displaced no fewer than 10,000 persons now living in four camps.

“The existential threat to Adara people is frightening and real, as both the Kaduna State and Federal Government are playing the ostrich to the security need and humanitarian catastrophe pervading the communities. In most of the communities under attacks, the difficult terrains and their locations make the task of reaching them herculean.”

Calling for federal intervention to end the genocide in Kaduna State, the Coalition Against Kajuru Killings has specifically asked for the deployment of state security forces, with aerial surveillance capability; humanitarian aid to help the injured and the displaced; and the establishment of an independent commission of enquiry  to investigate the spate of killings and the governor’s allegation of an earlier massacre of Fulani people.

One reason for the violence, said Fr Abba, is that Nigeria is increasingly being sub-divided into smaller states or administrative districts, which are then pitted against one another. He said: “We feel that the action in balkanising our traditional institution is a recipe for chaos and instability.

“In conclusion, together, let us strive to reignite the hope for our common humanity and walk in unity to end this culture of death and destruction in Birnin Gwari, Kajuru and Southern Kaduna. In the same vein, we call on the government to tackle these security challenges posed by these merciless attackers in all states of the Federation in order to restore safety of lives and property. May the Almighty God restore peace in our land and may love reign in the hearts of men and women.”