Still one of us campaign highlights ongoing battle for life 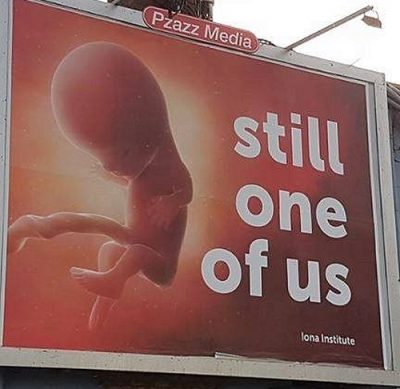 Almost a year after the referendum that repealed the Eighth Amendment, the Iona Institute has launched a new billboard campaign called ‘Still One of Us’.

The campaign is based on a similar billboard campaign last year called ‘One of Us’ and shows an unborn child at 11 weeks.

“We are showing the unborn baby at 11 weeks because that is within the time period when a perfectly healthy foetus of a perfectly healthy mother can be aborted, effectively on demand,” said Professor Patricia Casey, a patron of the Iona Institute. “It is also very apparent even at this early stage of the pregnancy that we are dealing with a human being”.

Ten posters will be on billboards for the next two weeks in Dublin, Cork city, Meath (Slane Road, Balrath) and Wicklow (on Bray’s main street). According to David Quinn, Director of the Iona Institute, there has been a huge positive reaction to the campaign, in particular on social media.

“There have been hundreds of shares of the image and thousands have seen it on social media.” Among those who re-tweeted it is the renowned Scottish composer James MacMillan.

“This is a way of signalling to pro life voters in particular, but also others in the public, that this is not an issue and a debate that is over,” Mr Quinn told CatholicIreland.net. “It’s ongoing. We’ll just keep persevering in fighting for the right to life of the unborn just as people on the pro choice side didn’t give up when they lost 2 to 1 in 1983.”

Despite the fact that Repeal the 8th won by 2 to 1, and the law has now been passed, he continued, this doesn’t alter one iota the fact that the unborn child in the womb is still a human being with the same moral right to life as the rest of us.

The campaign has cost €6,000 and Iona hopes that it can repeat the campaign every year in May if it can raise the money.

Speaking about the campaign, Professor Casey said the heavy defeat in the referendum last year could not mean that the pro life movement ceased to advocate for the right to life of the unborn. “No vote, no matter how big, has any effect on the basic fact that all human beings have a right to life even if our law no longer recognises this,” she said.

According to David Quinn, the Iona Institute is continuing to receive financial backing from the public. “Obviously it’s lower than in a referendum [year] because people did dig deep then but compared to a normal year we’re [financially] about the same and our meetings have been extremely well attended.”

Two hundred people attended a recent talk by David Quinn on anti-Catholicism in Ireland, and in January four hundred were at a talk by Rod Dreher, author of The Benedict Option. “We were wondering if there would be a drop-off, if people would be demoralised, but if anything we’re getting more people to our meetings and talks, which is fantastic,” said David Quinn.