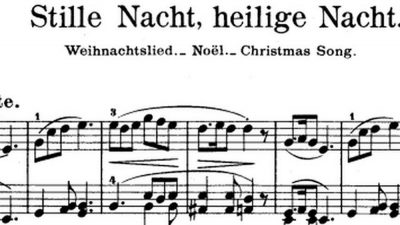 St Patrick’s College will be hosting a special exhibition to mark the 200th anniversary of “Silent Night”.

The exhibition, Silent Night 200 – History. Message. Present., by the Austrian Foreign Ministry, traces the origins of the popular Christmas carol’s lyrics and melody, its dissemination and also gives insight into the Carol’s Irish adaptations.

“Silent Night, Holy Night” (in German “Stille Nacht, Heilige Nacht”), originated in Austria in 1818, and is known in more than 300 languages and dialects around the world. In 2011, the carol was declared an intangible cultural heritage by UNESCO.

According to Dr John O’Keefe from St Patrick’s College, legend has it that on Christmas Eve 1818, in the Austrian town of Oberndorf bei Salzburg, Austria, the organ broke down and consternation ensued.

“An author stepped forwards with a simple text. His name was Joseph Mohr and he presented it to Franz Xaver Gruber who set it to music there and then, and the carol was first performed on that Christmas Eve, 1818.”

Dr O’Keefe said that Maynooth was honoured to host the exhibition at the request of the Austrian Government. “The exhibition will feature historical and musical context and some background to the two composers, but it will also have a special feature on the origins of the most popular Irish language translation – ‘Oíche Chiúin, Oíche Mhic De’.”

“Silent Night” has been recorded by a large number of singers from every music genre. The version sung by Bing Crosby is the third-best-selling single of all time.

The beautiful carol caused a cease fire on Christmas Eve 1914, when fighting on the battlefields of World War I stopped – and a lone soldier’s exquisite voice made history. “It was impromptu, no one planned it,” said Stanley Weintraub, the author of Silent Night: The Story of the World War I Christmas Truce. “It has to begin with something, and it did begin with elements of shared culture. If it hadn’t been for shared culture, certainly there would have been no Christmas truce.”

Weintraub said a German officer, Walter Kirchhoff, began to sing the song, first in German, then in English.

“In the clear, cold night of Christmas Eve, his voice carried very far. The shooting had stopped and in that silence he sang and the British knew the song and sang back.”

Gradually the troops crawled forward into No Man’s Land, said Weintraub. The song had a deep impact on many of the soldiers. “Soldiers … wrote home the day after to their families, to their wives, and to their parents, saying, ‘You won’t believe this. It was like a waking dream.’

“They recognised that on both ends of the rifle, they were the same.”

The exhibition is free of charge and open to the public from 9am to 6pm.