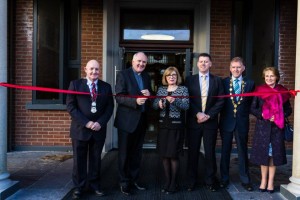 Bishop Brendan Leahy of Limerick was joined by the Minister for Education Jan O’Sullivan last week to formally open a refurbished and extended St Munchin’s College in the city.

St Munchin’s College is the Diocesan Catholic Secondary School for Limerick and is one of the oldest Catholic schools in Ireland having been founded in 1796.

The bishop and the minister were joined on the feast of St Munchin (3 January) by 120 students and 200 past pupils of St Munchin’s including Munster rugby coach and former Irish international Anthony Foley.

In his address, Bishop Leahy said that two centuries and more after its establishment, he was delighted to see St Munchin’s “go from strength to strength”. 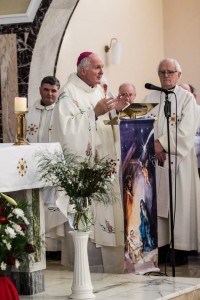 “I would like to say a big thanks to everyone involved in St Munchin’s College. As patron of the college, I really appreciate how much so many contribute to making the college such a fine and well-acclaimed school,” he added.

“One of the aspects that has struck me since I came to Limerick as bishop last year has been the number of men I meet around the diocese who tell me with great pride, ‘I went to school in St Munchin’s’ – and then regale me with stories from their school days.”

“I’m also conscious that St Munchin’s College, the oldest college in Limerick, has contributed a lot to the city and county and beyond. It is great to see the school going from strength to strength.”

Founded in 1796 as a diocesan college for young Limerick men entering the priesthood, St Munchin’s opened its doors to lay students early in the 19th century.

It was previously located at one time on the current site of Henry Street Garda station, before moving to Corbally in 1962.