St Mel’s to re-open for Christmas 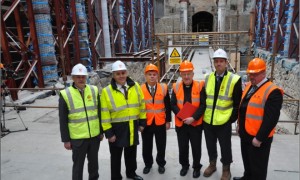 A Christmas re-opening is planned for St Mel’s Cathedral which was destroyed by fire in the early hours of Christmas Day 2009.

The Longford cathedral has undergone extensive renovations, reportedly costing around €30 million, in a building project involving 150 construction workers for which it won the ‘Largest Restoration Project in Western Europe’ award.

While Christmas 2014 has always been the planned re-opening date, it has only recently become certain that the work will be completed on time.

“We are going to make it. The work is progressing very well,” Fr Tom Healy told CatholicIreland.net.

“It (the opening) will be a great time of celebration and euphoria. We are putting our minds to that now. We are planning for all that is needed pastorally, and the choirs, ushers, and liturgical requirements.”

Fr Healy said that the cathedral does still look like a building site with JCBs and other heavy equipment however, the painters, plumbers, and carpenters are also working.

The cathedral was very badly damaged by the fire, and only the walls and the steeple remained standing.

“It was nothing short of a bomb site, and with the size of it and the age, it was a massive massive task to put it all back together again,” Fr Healy commented.

Around 85% of the building will be restored to what it was before the fire but there will be some changes to accommodate a new liturgical layout. 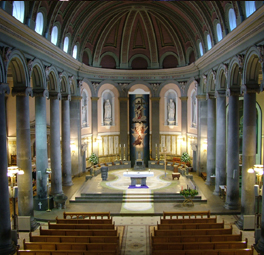 The altar caused a stir when it arrived in March, carved in Italian marble it weighed almost 8 tonne and train tracks had to be installed to maneuver it into the cathedral.

It was carved by Thomas Glendon, an artist from Dublin who works in Loughrea.

He is just one of up to 10 artists working on stained glass windows and other artistic features which will also add to the building.

In April the new Stations of the Cross were installed having been carved from solid Bath stone by Cork-based artist Ken Thompson. Each piece measures 46 x 55 inches, and are 4 inches deep.

The Longford parishioners who were without their cathedral had to be accommodated in nearby St Mel’s college chapel and gym while the five-year restoration work was going on.

Now they are looking forward to moving back ‘home’.

“It will be a busy intense time but also a wonderful time as St Mel’s reopens its door to welcome back its parishioners,” Fr Healy said.