Home > News > “Be close to your children” Pope urges fathers

“Be close to your children” Pope urges fathers 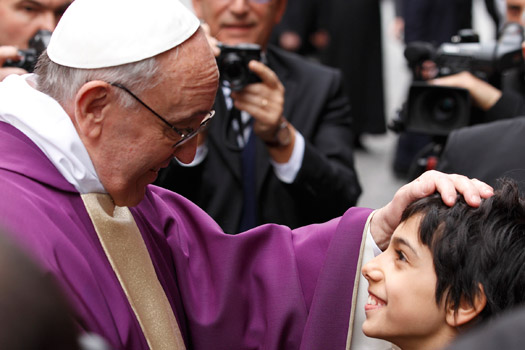 Pope Francis sent a special greeting to fathers all over the world on Wednesday urging them to “Be close” to their children because “they need you.”

In spontaneous comments, the Pontiff thanked fathers for what they do with their children and told them that “Just as St Joseph was close to Jesus in his physical, psychological and spiritual growth, you too must be guardians in age, wisdom and grace.”

Speaking on the Feast of St Joseph, Pope Francis told about 60,000 pilgrims assembled in St Peter’s Square that St Joseph is a model for all fathers and educators.

His catechesis focused on three aspects of the life and mission of St Joseph: as the ‘guardian’ of the Holy Family; as the teacher and educator of the young Jesus; and as a guide who helped Jesus respond to the working of the Holy Spirit.

Joseph, the spouse of the Virgin Mary, Patron of the universal Church, and carpenter of Nazareth, taught the young Jesus his trade and the value of work.

The Pope said Joseph also quietly imparted to Jesus that wisdom which consists above all in reverence for the Lord, prayer and fidelity to his word, and obedience to his will.

Joseph’s paternal example helped Jesus to grow, on a human level, in his understanding and appreciation of his unique relationship to his heavenly Father, the Pontiff explained.

“With Our Lady, Joseph guided the young Jesus as he responded to the working of the Holy Spirit in his heart and in his life,” he said.

The Pope concluded by praying that by his example and prayers, St Joseph would be a sure guide to all parents, priests and teachers charged with the education of our young.