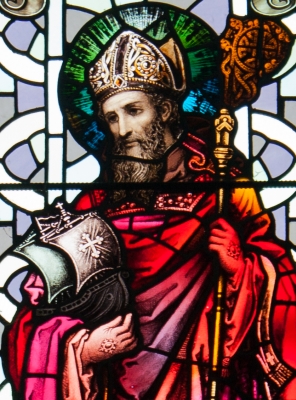 There is very little secure information concerning Brendan’s life, although at least the approximate dates of his birth and death, and accounts of some events in his life, are found in the Irish annals and genealogies. The first mention of Brendan occurs in Adamnan’s Vita Sancti Columbae, written between 679 and 704. The first notice of him as a seafarer appears in the ninth century Martyrology of Tallaght.

The principal works devoted to the saint and his legend are a ‘Life of Brendan’ in several Latin and Irish versions (Vita Brendani / Betha Brenainn) and the better known ‘Voyage of Saint Brendan the Abbot’ (Navigatio sancti Brendani abbatis). Unfortunately, the Lives and the Voyage provide little reliable information about his life and travels; they do, however, attest to the development of his following in the centuries after his death. An additional problem is that the precise relationship between the Vita and the Navigatio traditions is uncertain.

Any attempt to reconstruct the details of the life of the real Brendan or to understand the nature of the Brendan legend has to be based principally on the Irish annals and genealogies and on the various versions of the Vita Brendani.

In 484 AD Brendan was born in Tralee, in County Kerry, in the province of Munster, in the south-west of Ireland. He was born among the Altraige, a tribe originally centred around Tralee Bay, to parents called Finnlug and Cara. Tradition has it that he was born in the Kilfenora/Fenit area on the North side of the bay.

He was baptised at Tubrid, near Ardfert by Saint Erc, and was originally to be called “Mobhí” but signs and portents attending his birth and baptism led to him being christened ‘Broen-finn’ or ‘fair-drop’. For five years he was educated under Saint Ita, “the Brigid of Munster”. When he was six he was sent to Saint Jarlath’s monastery school at Tuam to further his education. Brendan is one of the “Twelve Apostles of Ireland”, one of those said to have been tutored by the great teacher, Finnian of Clonard.

At the age of twenty-six, Brendan was ordained a priest by Saint Erc. Afterwards, he founded a number of monasteries. Brendan’s first voyage took him to the Arran Islands, where he founded a monastery. He also visited Hinba (Argyll), an island off Scotland where he is said to have met Columcille (Columba). On the same voyage he traveled to Wales, and finally to Brittany, on the northern coast of France. Between the years 512 and 530 Brendan built monastic cells at Ardfert, and, at the foot of Mount Brandon, Shanakeel— Seana Cill, usually translated as “the old church”. From here he is supposed to have set out on his famous seven-year voyage for Paradise. The old Irish Calendars assigned a special feast for the “Egressio familiae S. Brendani”. 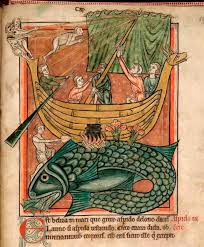 St. Brendan is chiefly renowned for his legendary journey to the Isle of the Blessed as described in the ninth century Voyage of St Brendan the Navigator. Many versions exist that tell of how he set out onto the Atlantic Ocean with sixteen pilgrims (other versions have fourteen, plus three unbelievers who join at the last minute) searching for the Garden of Eden. One of these companions is said to have been Saint Malo, the namesake of Saint-Malo. If it happened, this would have occurred sometime between AD 512–530, before his travel to the island of Great Britain. On his trip, Brendan is supposed to have seen Saint Brendan’s Island, a blessed island covered with vegetation. He also encountered a sea monster, an adventure he shared with his contemporary Saint Columba. The most commonly illustrated adventure is his landing on an island which turns out to be a giant sea monster called Jasconius or Jascon. This too, has its parallels in other stories, not only in Irish mythology but in other traditions, from Sinbad the Sailor to Pinocchio.

On the Kerry coast, he built a currach-like boat of wattle, covered it with hides tanned in oak bark softened with butter, set up a mast and a sail. He and a small group of monks fasted for forty days, and after a prayer upon the shore, embarked in the name of the Trinity. The account is characterized by a great deal of literary license and contains references to hell where “great demons threw down lumps of fiery slag from an island with rivers of gold fire” and “great crystal pillars.” Many now believe these to be references to the volcanic activity around Iceland, and to icebergs.

Later life
Brendan travelled to Wales and the holy island of Iona, off the west coast of Scotland; returning to Ireland, he founded a monastery at Annaghdown, where he spent the rest of his days.He also founded a convent at Annaghdown for his sister Briga. Having established the bishopric of Ardfert, St Brendan proceeded to Thomond, and founded a monastery at Inis-da-druim (now Coney Island), in the present parish of Killadysert, County Clare, about the year 550. He then journeyed to Wales and studied under Saint Gildas at Llancarfan, and thence to Iona, for he is said to have left traces of his apostolic zeal at Kil-brandon (near Oban) and Kil-brennan Sound. After a three years’ mission in Britain he returned to Ireland, and did more proselytising in various parts of Leinster, especially at Dysart (County Kilkenny), Killiney (Tubberboe), and Brandon Hill. He established churches at Inchiquin, County Galway and at Inishglora, County Mayo, and founded Clonfert in Galway around 557 AD. He died c. 577 at Annaghdown, while visiting his sister Briga. Fearing that after his death his devotees might take his remains as relics, Brendan had arranged before dying to have his body secretly carried back to the monastery he founded at Clonfert concealed in a luggage cart. He was buried in Clonfert Cathedral.

This description of St Brendan comes courtesy of Wikipedia.