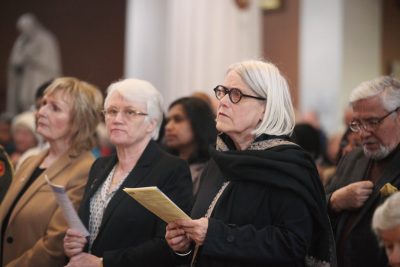 Darina Allen, Honorary Consul General of Sri Lanka to Ireland, at the Mass to remember the victims of the Sri Lanka bombings in the Pro Cathedral in Dublin. Pic John McElroy.

Sri Lankan academic Dr Jude Lal Fernando of the Irish School of Ecumenics has lamented attempts to pit Islam against Christianity in his home country, where he said there have been no Christian–Muslim clashes up to now.

In his address in Dublin’s Pro Cathedral at a Mass to commemorate the victims of the Easter Sunday attacks in Sri Lanka, Dr Lal Fernando accused those who responded to the attacks by claiming Christians have been persecuted by Muslims on the most holy day of the liturgical year of speaking “the rhetoric of death”.

He warned that it was the rhetoric that many “far-right groups and political parties in historically Christian-majority countries tell; it is the story of great powers that have hidden agendas”.

In his reflection, he recalled how he and his wife had contacted his sister, a primary school teacher who lives a short distance away from St Sebastian’s church in Negombo, in the wake of its bombing on Easter Sunday.

He said that she, with her staff, “desperately attempted to identify the lifeless and disfigured bodies of her pupils”. His sister’s school lost 7 pupils along with 18 of their family members. 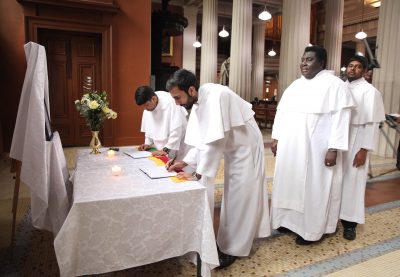 Br Simon, Br Barry, Br Raj and Bro Theiva from the Presentation Brothers signing the book of condolence before the Mass to remember the victims of the Sri Lanka bombings. Pic John McElroy.

He regretted that security was now the focus in Sri Lanka, saying that “Further militarisation has been called for in a country where the density of soldiers to civilians is one of the highest in the world.

“It is highly distressing to hear that one of the main responses generated after the Easter Sunday killings in Sri Lanka leads us further to the path of death and destruction. Not life but greater ‘security’ is the call.”

He added, “Since last Sunday the existing lethal global narrative: Islam vs Christianity, or Islam vs the West, or Islam vs the Rest has been imposed on the country of my birth.” He also highlighted that Muslim clerics or Imams have been prevented from attending the funerals, and joint memorial ceremonies have been strongly discouraged.

“Instead, retaliation has been encouraged under the deadliest narrative of Islam vs Christianity. Churches are closed. The mosques do not use public address systems to conduct their prayers. Affected Christian families live in deep sorrow. The Muslim community lives in fear and are unable to step out of their homes. Both Catholic and Protestant leaders have to listen to the security advice of the state that knows nothing but retaliation.”

Archbishop Diarmuid Martin of Dublin said at the same ceremony, which was attended by President Michael D. Higgins; the Taoiseach’s Aide-de-Camp, Commandant Caroline Burke; members of the 3,000-strong Sri Lankan community living in Ireland; and the Honorary Consul General of Sri Lanka to Ireland, the chef and food writer Darina Allen, that an attack on a minority or any single group in a population is an attack on the entire population.

Dr Martin said the tragedies witnessed in recent days both in Ireland and in Sri Lanka “result from groups who take it upon themselves to decide the narrow type of society they feel is the right one and to impose it on all.

“We were all shocked at the terrible violence that hit the Sri Lankan nation.”

He told the congregation that those responsible for the attacks feel they can turn to “blind violence to enforce their view” but that this attitude “is an affront to the desire of people of goodwill … who want a peace in which all can grow and work together in harmony and respect”. 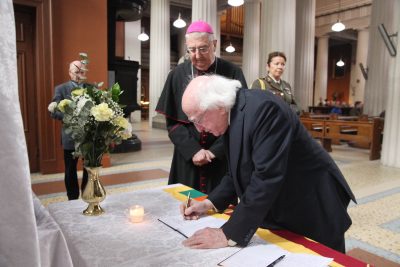 President Michael D. Higgins signing a book of condolence in the Pro Cathedral on Sunday morning watched by Archbishop Diarmuid Martin before a Mass to remember the victims of the Sri Lanka bombings. Pic John McElroy.

Darina Allen said after the Mass in the Pro Cathedral, “We are hoping that everybody will have the strength and courage to forgive and move on because everybody wants peace and there is never any justification for anything like this.”

On Sunday evening in Armagh, Archbishop Eamon Martin said he intended to unveil in the cathedral a shrine to the former Archbishop of Armagh St Oliver Plunkett and to all those who, like him, faced persecution and martyrdom for the faith.

“The shrine will honour all the martyrs of yesterday, today and tomorrow, recognising that persecution and martyrdom of Christians does not belong to the past – it is sadly a present day reality for many of our brothers and sisters and this situation is likely to continue, or even get worse into the future.”

The Primate of All Ireland added, “The witness and martyrdom of so many persecuted Christians around the world challenges us to ask, what does their suffering mean for us?”

Speaking on Divine Mercy Sunday, he said it was “heartbreaking to think that our Sri Lankan brothers and sisters in Christ were unable to gather for Mass today, Divine Mercy Sunday, because of risk to their lives following the horrific bombings of worshippers and tourists on Easter Sunday.

“These atrocities remind us of the life-threatening conditions of our fellow Christians in many parts of the world. Such oppression and violence against Christians is actually, I am sad to say, on the increase.” 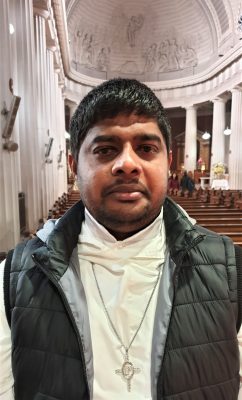 At the Pro Cathedral in Dublin, Presentation Brother Theiva Sebastiyampillai from Sri Lanka told CatholicIreland.net that he had been many times to the shrine of St Anthony in Colombo, which was bombed.

He said his family and friends were “panicked” at the moment in the wake of the atrocities and afraid to go out.

“This is the first time churches have been attacked – this did not happen during the civil war. We had one freedom during those years and it was religious freedom. Now, I am so sad to say, our religious freedom is gone …”

Brother Theiva, who is studying in the Presentation Formation House in Glasthule and aims to make his Final Profession in Sri Lanka next year, did not lose any relatives in the attacks.

However, a friend had lost his whole family, with the only other survivor being a one-year-old child.