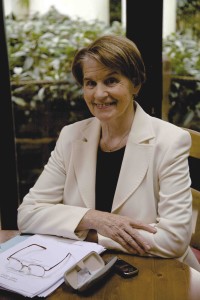 St Brigid and Sr Stan Kennedy are among the 100 top Irish women in history feature in the Irish Independent next Saturday (20 September).

In advance of the 32-page publication featuring the women who have helped shape this country, the newspaper ran a poll to vote number one from a choice of 10 women.

Focus Ireland promoted its life president and founder stating that Sr Stan is “a truly remarkable woman who has set up and supported a number of services that have changed tens of thousands of lives.”

Focus recalled that in 1984, Sr Stan spent a year with eight young women who had been homeless and they opened her eyes and heart to the whole world of being homeless with all its pain and deep sadness.

This led to Sr Stan’s founding of ‘Focus Point’ in 1985 as a coffee shop in Temple Bar which opened its doors to people who were out-of-home. Focus Point eventually evolved into Focus Ireland.

Of Sr Stan, the Irish Independent says, “the Sisters of Charity nun is best known for her work with the homeless. She was a co-founder of the homelessness charity Focus Ireland and also set up the Immigrant Council of Ireland. She is a former Council of State member.”

The Immigrant Council of Ireland welcomed the “wonderful” news that its founder Sr Stan made it into the Irish Independent’s greatest women in Irish history. 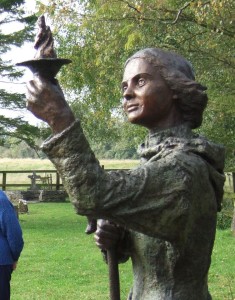 Also featured on a list of top Irish women is St Brigid.

The Independent describes her as: “one of Ireland’s patron saints, St Brigid of Kildare founded many abbeys, including the Abbey of Kildare. There are many conflicting biographies about her life but she is celebrated every 1 February with the making of the distinctive St Brigid’s crosses.”

Sr Rita Minehan of the Brigidine Sisters was unaware of St Brigid’s inclusion in the top 100.

“I’m delighted” she told CatholicIreland.net and she expressed the hope that she would be voted into the number one position.

The top 100 women in the special feature which includes all sorts of heroes from presidents, writers, singers, scientists, campaigners, doctors, CEOs, actors, and warriors.

For example, Dorothy Stopford Price, who helped in eliminate childhood tuberculosis in Ireland is included as is Christina Noble, who has a film just released about her life helping destitute children in Vietnam and Mongolia.

The list includes women who have helped to shape this country spanning many centuries ranging from religious to political and civil leaders as well as those involved in humanitarian work and those who inspired the nation during their day and now in this century.

Among them are Ireland’s first ever female president Mary Robinson, Countess Markievicz, and suffragette and Irish nationalist, Hannah Sheehy-Skeffington.