The Primate of All Ireland has reiterated the bishops’ opposition to the proposed constitutional amendment on marriage.

In a homily delivered in the French shrine of Lourdes, Archbishop Eamon Martin of Armagh said the bishops are clear that they cannot support this amendment and they have asked the people of Ireland to reflect and pray very carefully before voting.

He asked those at the Mass in the French town to pray for a special intention, a reference to the referendum vote on 22 May, which he said seeks to change the meaning of marriage and family in the Constitution.

He sought to allay the anger of gays and lesbians explaining that when the Church prayed for, and spoke up for the institution of marriage, “as it has been understood across cultures and down the ages” it was not trying to hurt or offend anyone.

“We simply want to respect the dignity of difference between male and female,” he stated.

Archbishop Martin added, “We want to protect and promote the uniqueness of that special relationship between a wife, a husband and their children which is sanctified by Our Creator, endorsed by Jesus, and which is such a powerful and prophetic beacon of hope for society.”

He paid tribute to those in Ireland and around the world who began a novena on Wednesday or are praying the Rosary, or fasting and doing penance for this special intention of marriage and the family.

Referring to Pope Francis’ message for World Communications Day this coming Sunday, he explained that the Pope describes the family as a “privileged place of encounter with the gift of love”.

The Archbishop said that according to the Pope “families, at their best, actively communicate by their witness the beauty and the richness of the relationship between man and woman, and between parents and children”. 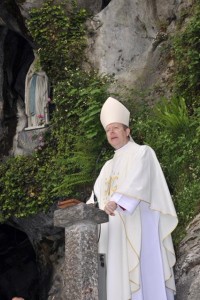 Separately, Bishop Brendan Kelly of Achonry has released a statement on the marriage referendum.

In it, Bishop Kelly warns that the proposed change to the Constitution will mean that the Irish State and all its laws will not recognise anymore that the union in marriage of a man and a woman is a unique and irreplaceable good for this society, and worthy of recognition and protection by the Irish people.

“The marriage of a man and woman is a union that supports the mutual love of husband and wife, and offers them security for life. It also provides the natural, irreplaceable and best environment within which children can be born and brought up,” Bishop Kelly underlined.

He said gender difference was fundamental to who we are and was “at the heart of marriage, fundamental for the welfare of children, and critical to the survival of the human race”.

The Bishop of Achonry said people in Ireland have “undoubtedly suffered unjust discrimination because of their sexual orientation. They have felt excluded, marginalised and silenced”.

He added that thankfully this situation has been changing for the better in recent decades.

“As a society we must work always to eliminate unjust discrimination and to include all people. As Christians we are obliged to love all people without exception, as Christ loved us even unto death,” he said.

He said much work has been done and progress made, legally and otherwise, to ensure appropriate rights and equality for all.

But the Bishop appealed to people that the continuance of this journey of securing equality for all would seek other means to the removal of the recognition in the constitution and Irish law of the uniqueness and value of the union of male and female in marriage.