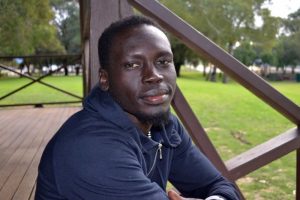 South Sudan’s first ever Olympic team will compete in Rio later this year. Against all the odds, refugee Mangar Makur Chuot will represent his country.

He was just four years old when his father was shot and killed. He and his family spent nine years in a refugee camp in Kenya before being granted asylum in Australia in 2005.

Chuot says he was a ‘jungle kid’, always running. But it wasn’t until he arrived in Perth that he considered athletics as a career.

In 2009, he showed up at an athletics programme in a park in Balga, one of Perth’s northern suburbs, and met the coach who would take him all the way to Rio.

Lindsay Bunn runs the Culturally and Linguistically Diverse (CALD) and Indigenous Programme for Athletics Western Australia. The aim of the programme is to bring free, elite training to disadvantaged children around the state.

“We had a few cones and a rusty old set of starting blocks and a stopwatch,” he says.

His first impression of the young refugee was less than glowing. After that first day of training, Bunn remembers phoning another coach and describing Chuot as a “giraffe on amphetamines”.

“When Mangar first came down he was very gangly and uncoordinated, I suppose is the polite way of putting it,” Bunn says.

“But one thing about Mangar and why he has succeeded is that he’s the hardest trainer and the most dedicated to perfecting technique that I’ve ever come across. That’s what’s given him what I consider to be an international technique.”

“Considering everything he’s been through, his ability to focus out on the track and learn new things and take himself to a much higher level is probably the most impressive thing I’ve ever seen in an athlete.”

Those challenges were not limited to Chuot’s time in Africa. Since arriving in Perth, the sprinter has been attacked at least three times, including one occasion when a group of Sudanese men broke into his home and bashed him.

His 2012 Olympic bid was hampered by a hamstring injury, which his coach blames on the attack.

Now, finally, his Olympic dream is set to come true.

But first, Chuot and Bunn will travel to the Kimberley to run a series of athletics workshops with Aboriginal children in remote communities.

It’s a regular trip for the duo, and Bunn says he’s been stunned by the connection between the refugee sprinter and the local children.

“When we go there now, we go to a place that knows us; Mangar’s treated like a rock star.”

Chuot speaks with equal enthusiasm about the remote community workshops.

“Outback kids are like me as a young kid so they’re very easy to get along with,” he says.

“They’re very tough kids. And that was me.”

It’ll be an emotional moment for Chuot when he steps out as part of South Sudan’s first-ever Olympic team in Rio later this year. The sprinter will be representing his slain father, Makur Chuot.

“It’s a pride thing to do it for him. To just go and present his name,” Chuot says. “My name is Mangar but when I go running I put his name first, Makur Chuot, because he inspired me in a way.”

Bunn admits some disappointment that Chuot will not represent Australia when he steps onto the track in Rio.

“Mangar knows I would have liked for him to represent Australia,” Bunn says

“But by the same token, I fully understand the fact that his father died actually fighting to form the new country of South Sudan. He was a very important person there. Mangar wants to honour his father.”

As for how he thinks the sprinter will fare on the big day, Bunn is keeping his cards close to his chest.

“I describe Mangar like a lucky dip,” he says.

“You never know what you’re going to get. I’ve seen him do things at various parts of races that are world class. He’s got all the bits. It’s quite possible that they could all come together at some point and he could do something sensational.”

Chuot is feeling good. “It’s my first time doing an international meet and I just can’t wait,” he says.

“The talent is there, the speed is there. I have a positive feeling about it.”