Former soldier to be ordained in St Mel’s today 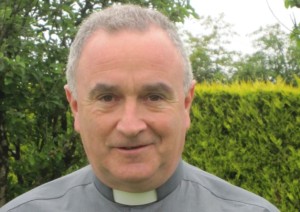 A former soldier will be ordained to the priesthood later today in St Mel’s Cathedral by Bishop Francis Duffy.

Longford native Seamus O’Rourke (56), a former member of the Defence Forces in Athlone, will be ordained for the Diocese of Ardagh and Clonmacnois at 3pm in the newly restored cathedral.

The eldest of three children, Rev O’Rourke attended the local national school in Bunlahy, then Cnoc Mhuire, Granard before joining the Army and completing basic training at Custume Barracks, Athlone.

Seamus then joined the Army Signal Corps and was selected for training as a telecommunications technician in Cork and DIT Kevin Street, Dublin.

He subsequently became an instructor at the Army School of Signals in the Curragh and served with UNIFIL in 1979-80.

After eleven years’ service he took up a position as an instructor with the Civil Aviation Authority in Jeddah, Saudi Arabia which lasted for three years.

Returning to London, he worked as a technician with British Airways at Heathrow Airport for two years and later worked for Co Longford VEC.

Speaking on local radio last week he said that he first started to consider the priesthood when based in the Curragh in Co Kildare when he was his late 20s. ”I initially explored it with the Jesuits and then with the Dublin Archdiocese”, he explained.

“After a lot of consultation, I got the impression that, perhaps no, it was not for me. I thought that I was maybe too old at that stage, even though that was over 20 years ago. That was when I started working abroad. But the idea of priesthood came back to me many times.”

What really focused his mind on the priesthood, however, was a conversation with local priest Fr Peter Beglan following the death of his mother in 2007 which began the process “which led me to enter the national seminary in Maynooth in 2009”.

He continued, “somehow or other I hope I can be instrumental in people seeing that, outside this immediate world, there is a transcendental world, that God is there and is present in all things and in all people”.

The Longford-native is delighted to have his ordination at St Mel’s Cathedral as he was present at Christmas Eve Mass on the night it was destroyed in the devastating fire.

“I was Deacon to Bishop Colm at Christmas Eve Mass there last Christmas and again on Christmas Day, so it is an incredible honour for me to be ordained there,” he said.

“I would ask people to pray for me and I hope that I can be of service to all those who need me in the future.”