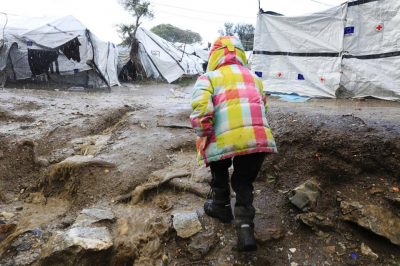 Hours after a 24-year-old man from Cameroon was found dead at a refugee camp in Greece, an Oxfam report stated that hundreds of vulnerable people, including survivors of torture, are being abandoned in sub-standard conditions.

Commenting on the young man’s death after snow fell at Moria camp on the island of Lesbos, Oxfam told Catholicireland.net that it was tragic.

“Although we don’t yet know the cause of death, our concern is that there could be more deaths with the recent freezing weather and the poor preparations for winter in the camps,” a spokesperson stated.

Oxfam also told Catholicireland.net that every year conditions in and around the camps deteriorate further with the onset of winter because they are not equipped for cold temperatures, heavy rain or snowfall. Oxfam Ireland’s Chief Executive, Jim Clarken, said that winter had already brought heavy rain to Lesbos, turning the tented areas of the camp into a muddy bog. With the recent snowfalls, people were desperate to keep warm, and burned anything they could find, including plastic. They also took dangerous improvised heaters into their tents.

“Moria camp is severely overcrowded at double its capacity,” Jim Clarken said. “All of these factors compound the many challenges already faced by people living in the camps, making those most vulnerable even more desperate. Pregnant women and mothers with newborn babies are sleeping in tents, without heating.”

He added that it is vital that vulnerable people are quickly identified and can access the protection and care they need, “including suitable accommodation, medical and psycho-social support and access to other basic services.”

Oxfam Ireland explained that winter makes life in Moria and the improvised Olive Grove camp even harder than it already is for asylum seekers, and especially for the most vulnerable. The average temperature drops to around 8 °C between December and February, and frequently slips below freezing point. In December the island receives three times the average rainfall that London receives in the same month. In January 2017 a cold snap saw the temperature plunge to −5 °C in Lesbos and the entire camp was covered in thick snow.

There is some heating in buildings and containers in Moria, but still a large number of people live in tents with no heating. The recent cold snap has caused problems for generators, which means that the electricity has been dropping out (and with it the heaters).

The Oxfam report, titled Vulnerable and Abandoned, highlights the many problems that existed before the snowfall, for example for a lot of the last year there has been just one government-appointed doctor in Lesbos who was responsible for screening as many as 2000 people arriving each month. In November there was no doctor at all to perform medical screenings.

The report includes accounts of mothers being discharged from hospital to live in a tent as early as four days after giving birth by Caesarean section. It tells of survivors of sexual violence and other traumas living in a camp where fights break out regularly and where two-thirds of residents say they never feel safe.

“It is irresponsible and reckless to fail to recognise the most vulnerable people and respond to their needs,” said Renata Rendón, Oxfam’s Head of Mission in Greece. “Identifying and providing for the needs of such people is the most basic duty of the Greek government and its European partners.”

Oxfam points out that under Greek and EU law, the legal definition of vulnerability specifically includes unaccompanied children, women who are pregnant or with young babies, people with disabilities and survivors of torture, among others. They should have access to the normal Greek asylum process instead of a fast-tracked process designed to send them back to Turkey. They should be given suitable accommodation and appropriate medical care on the mainland. 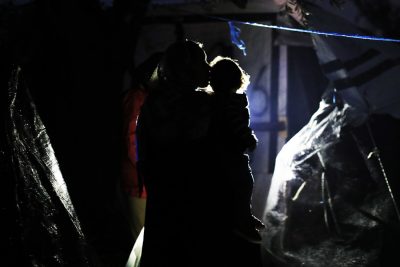 One example is a 28-year-old asylum seeker from Cameroon locked up for five months based on his nationality despite having serious mental health issues. No one checked his physical and mental health before he was detained, and it took a month for him to see a psychologist.

He said: “We had just two hours a day when we were allowed to get out of the container … The rest of the time you are sitting in a small space with 15 other men who all have their own problems.”

Renata Rendón said that local authorities and humanitarian groups are making efforts to improve conditions in places like Lesbos. “Unfortunately, this is made almost impossible by policies supported by the Greek government and EU that keep people trapped on the islands for indefinite periods,” she said.

Oxfam called for the Greek government and EU member states to deploy more expert staff, including doctors and psychologists, and to fix the screening system on the Greek islands. It said that more people seeking asylum should be transferred to mainland Greece on a regular basis – particularly the vulnerable. Oxfam also called on EU member states to share responsibility for receiving asylum seekers with Greece more fairly and by reforming regulations.