Home > News > The poor suffered most in recession according to SJI

The poor suffered most in recession according to SJI 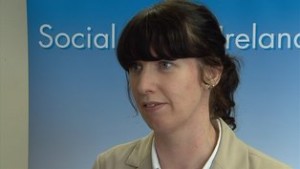 Ireland’s poorest 10% were the biggest losers in the economic crash and lost 18.4% of real disposable income (after taxes) compared to 11.4% loss among the richest 10%.

The figures were revealed by Social Justice Ireland’s (SJI) latest research on the impact of the crash in 2008 on the population.

She explained that the 18.4% figure is based on data for 2011, and as the budgets for 2012 and 2013 were regressive, the figure is likely to show even more falls in the income available to those poorer groups.

This is just one issue highlighted in SJI’s latest the report entitled Who really took the hits during Ireland’s Bailout?

“Over the weekend we heard the Taoiseach and the Tanaiste speak of December 15th and throwing off the shackles and regaining our economic sovereignty,” she said.

“(We need) progressive budgets, and to protect those on very low and middle incomes who have not been protected. Those are people who are being impacted most by cuts in expenditure in health, education and all these other services and (we need) to start implementing policies so that those who have the most, pay the most, because they can afford to do so.”

She suggested that corporation tax should make more of a contribution to the economy. She also questioned Ireland’s policy of attracting foreign direct investment to create jobs, while the tax return on this is small.

The report states that if the many cuts to services and the increasing charges for them were added to the calculations, the hit on the poor is even harder.

“The people who rely most on public services are people with a disability, older people, families with children, they are the heaviest users of services,” Michelle Murphy said.

She gives an example of the charges for school transport.

Other findings show that the gap between low and middle-income in Ireland and the rich has widened dramatically. The richest 20% of the population was the only group to see total disposable income grow in the last five years.

SJI highlights that budgets introduced under the Troika (2011-2014) were regressive, taking more as a percentage of income from those who have least. However the 2008-2009-2010 budgets (before the Troika arrived) were not regressive.

SJI states that the Government did have choices in recent years and could have introduced fairer budgets. Instead the choices they made resulted in increased inequality in Ireland.

Meanwhile, research produced by the IMF shows that the way the Government chose to reduce the deficit was always likely to produce greater inequality and higher levels of unemployment. Other options were and are available.