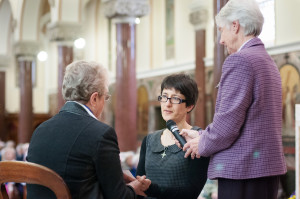 The newly professed nun is originally from Ballincollig, Co Cork and she was joined by her parents Mary and John, her brother Tim and his wife Eilish and their two sons, Sam and Joe as she pledged obedience to the Congregation Prioress, Sr Helen Mary Harmey OP.

“This is because for us obedience refers not just to one of the vows, and not even to all three vows at once. It refers to the call of being a Dominican, inclusive of all elements of our life – community, prayer, study and preaching. This is our Obedience and it is marked by the value of freedom, freedom to listen to God, self and community. Our freedom is not license but has within it the demands and choice of personal and communal responsibility,” Sr Helen Mary said.

According to Sr Edel Murphy OP, “It was a beautiful day, marked with the choir made up of the Dominican sisters whose singing held the beauty of the Dominican tradition of liturgical prayer.”

She added, “Sr Eileen felt the joy and prayer of so many sisters, family members and others who have journeyed with her to this day and who will continue to be of support to her along her journey.”

Recounting her vocation story on the Dominican website, Sr Eileen explained that she didn’t want to be a sister or a nun. 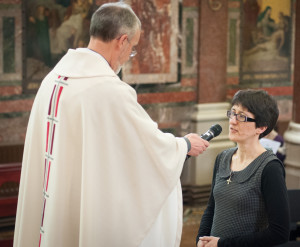 “My sense of call came suddenly and, to my mind, at least at the time, seemingly out of the blue.”

During a life-changing trip to the Holy Land in 2010, she had an experience that left her feeling God wanted more from her.

“I had no idea what that more might be so sought the advice of a good friend. He suggested I commit to remaining open and advised that for the next year I say ‘yes’ to whatever I was asked – in as far as it was practical – as a way to become aware of what God might want of me.”

“Having always been a thinker, I began to go now with my instincts, deciding on, or saying yes to, things without thinking them to death!”

She agreed to be on the Alpha team in my parish and applied to do a Certificate in Holistic Spirituality in Ennismore Retreat Centre, Cork.

“It was during my time in Ennismore that I realised very clearly that I had fallen in love with God and that I was no longer satisfied with a life that wasn’t very full of God. Then, I began to really spend time asking God to show me in some very obvious way what to do. It seems God answered quite quickly.”

“One evening, the crazy notion that I had to ‘check out the Dominicans’ came into my head.”

“Although I tried to ignore it, the idea wouldn’t let me go. It was so strong and unrelenting that soon afterwards I contacted the vocations coordinator, Kathleen Fitzsimons, and subsequently arranged to meet her on 20 March 2011.”

“That afternoon, I returned home knowing that I needed to meet her again. Everything about the Dominicans seemed to make sense to me in some way that made no sense and I felt I needed to continue exploring.”

“By July, I had sought acceptance to the pre-novitiate programme, which began on 16 September. During the next 15 months, I attended assemblies, a Congregation Course, visited various houses and stayed with several communities.”

“Every time, I was struck by how at ease and at home I felt. The sense that this might be right for me grew stronger and surer so that the decision to ask to enter novitiate became inevitable.”

While I knew leaving my family and my home would be difficult, I knew also that I had to try, that if I didn’t I couldn’t be at peace.

So she moved into Bancroft Park, the novitiate house, on 6 January 2013, with “little idea of what was ahead, but with a firm trust that whatever it was, God would be with me in it”.