Home > News > This is not a single-issue referendum: Bishop Nulty

This is not a single-issue referendum: Bishop Nulty

Bishop Denis Nulty of Kildare & Leighlin has warned that the vote on 22 May is not a single-issue referendum but one which is “very complex and demands careful reflection”.

In a statement issued this weekend, Bishop Nulty, who is president of the Catholic marriage counselling agency, ACCORD, said the result of the referendum will have “many serious implications for our society”.

Referring to the bishops statement ‘Marriage is important – reflect before you change it’, Dr Nulty said that was exactly what he has been doing and he invited the people of his diocese to reflect deeply on the issue over the coming weeks.

“In making your referendum decision, I encourage you to value the model of Christian marriage which is the fundamental building block of our society.”

He added, “Your opinion matters, so make sure your voice is heard, and vote on May 22nd. Only by voting, can you ensure your voice speaks in the referendum result.”

Elsewhere in his statement, the bishop warned, “We cannot teach future generations that preparing yourself for planning a family based on the stable relationship between a man and a woman is the same as living with a person of the same sex.”

“Let us also be aware that, in seeking to advance a supposed claim on behalf of the rights of adults, we may be setting aside the far greater right of children (who are the only ones who should be privileged in this situation) to rely on models of father and mother, mum and dad.”

He also cited a letter written by Pope Francis when he was Archbishop of Buenos Aires.

Argentina at the time was faced with the same debate with which the people of Ireland are currently engaged.

In the letter, the future pope wrote, “A marriage (made up of man and woman) is not the same as the union of two people of the same sex. To distinguish is not to discriminate but to respect differences; to differentiate in order to discern is to value appropriately, not to discriminate.”

“At a time when we place emphasis on the richness of pluralism and social and cultural diversity, it is a contradiction to minimise human differences. A father is not the same as a mother,” Cardinal Bergoglio said. 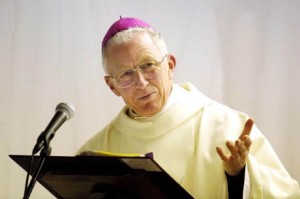 Separately, Bishop Philip Boyce of Raphoe diocese has issued the following pastoral catechesis on Marriage and the Family:

Is the upcoming Referendum aimed at establishing equality and removing discrimination?

All people are equal before the law and in God’s eyes. At the same time, people are different. A man and a woman have different but complementary gifts. Equality and human rights should be afforded to everyone, but it should be done without sacrificing the institution of marriage and the family. The Church respects an equality that recognises difference – not an equality that destroys all difference. To recognise the difference in the way we are made is not discrimination and it does not undermine equality.

Are same-sex couples at a disadvantage?

Civil partnership recognises same-sex unions and can give them legal rights, without changing the definition of marriage and the family. The Church teaches that people with homosexual tendencies “must be accepted with respect, compassion and sensitivity” (Catechism of the Catholic Church, No. 2358).

Are fathers and mothers necessary?

Fathers and mothers are most important. A man and a woman complement each other in a way that two men or two women cannot. At certain periods in a child’s growth, a mother‘s love and care are of the greatest advantage; at other times, it is a father’s love and strength and example that are most needed. We should not deliberately deprive children, yet to be born, of a father or a mother, leaving them fatherless or motherless by design. By voting for the so-called gender theory, as if there were no difference between a man and a woman in marriage, “we risk taking a step backwards. The removal of difference in fact creates a problem, not a solution” (Pope Francis, 15 April 2015).

What would Jesus say?

In the beginning “God created man in his own image, in the image of God he created him; male and female he created them. And God blessed them, and God said to them: ‘be fruitful and multiply’ ” (Gen. 9: 27-28). The Lord Jesus said: “Have you not read that he who made them from the beginning made them male and female?… for this reason a man shall leave his father and mother and be joined to his wife. And the two shall become one” (Mt. 19: 4-5).

Does the Referendum, if carried, affect children?

Yes, it would have serious implications. Every child, no matter what sexual orientation he/she may have, has the human right to a father and a mother. We should not vote to legalise intentionally a situation where a child would be fatherless or motherless, not able to say ‘dad’ and ‘mammy’ to two parents.

What about the family?

The Referendum aims at changing the meaning of “family” and “marriage”. We are being asked to change our Constitution, so that marriage may be contracted in accordance with law by two persons without distinction to their sex. Yet, two persons of the same sex cannot procreate children. The reason why the State recognises and supports the family is precisely because of children. The future of a nation depends on them. We must affirm the right of children to grow up in a family, with a father and mother, in an atmosphere suitable for their development and emotional maturity. Therefore, use your vote.

Can you with a clear conscience vote “yes”?

Are you voting ‘No’?