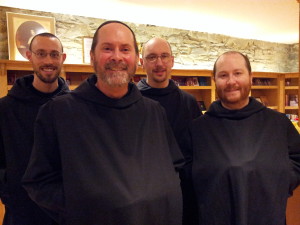 The fundraising deadline for Ireland’s newest monastery is just four days away and the Benedictine monks of Silverstream Priory still need €150,000.

The community of five was founded from its parent community in the diocese of Tulsa in Oklahoma in the US and ended up coming to Ireland when the house the community was renting in Tulsa became too small.

Prior, Dom Mark Daniel Kirby, explained that they need to purchase the Victorian-era monastery to make their future secure and to do major work to stem its descent into further decay.

Silverstream Priory was built around 1845 on 15 acres of countryside near Stamullen.

It had been owned by the Visitation Order of nuns from 1955. They moved out four years ago when their members needed nursing home care and they sought to sell the property to raises these funds.

The price tag for the property was €750,000 including a chapel that is crumbling and in bad need of repair.

The Benedictine monks intend to offer retreats to priests and religious and self-fund itself but it can’t do that until this financial hurdle is overcome.

“For a monastery to really flourish, there has to be that security that we can say this is home,” Dom Mark Daniel Kirby said and he explained, “We don’t own anything personally but the monastery has to be rooted in a place.”

He said the way of life they were living as Benedictines was the same since the 6th century and that as Ireland had once been covered with monasteries, they were trying to keep that memory alive.

“We are here to stay – we are planted here and we’ve already put down roots. I believe that God called us to Silverstream and that this is where we are supposed to be.”

“The Second Vatican Council taught that a local church is incomplete until it has a contemplative monastery. So it is important that we remain and that we continue to flourish because we are getting vocations and there are more on the way. But we must secure the monastery first,” he said.

Speaking at the Stamullen priory, 34-year-old Dom Benedict Andersen told CatholicIreland.net, “Our monastery began in Tulsa in 2007. We were founded by the Bishop of Tulsa, Edward Slattery and we took root there.”

“I joined the monastery when we were in Tulsa and we were in a rented house in Tulsa – sort of looking for a property to move on to so that we could grow. We couldn’t really find anything adequate in Tulsa so we asked the bishop would he allow us to look outside the diocese. He said where are you thinking of, and we said maybe Ireland, and he said well if it is Ireland that is ok.”

“We came into contact with Fr John Hogan who is the parish priest of Rathkenny in the diocese of Meath. He said that there was a monastery in Stamullen of the Visitation nuns and they are thinking of leaving. So we got in contact with the bishop of Meath and he said you are very welcome to come here.” 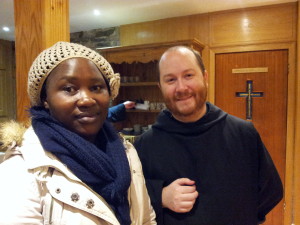 Silverstream Priory is currently the only contemplative monastery in the diocese of Meath. Though it has been in Ireland less than four years and is already attracting new candidates.

One of these is novice Dom Finian who is from just outside Navan.

The 34-year-old was prior to joining the monastery an instrumentation technician who worked in calibrating scientific instruments such as gas turbines.

He was living in Bedford in the UK before he embarked on his vocational journey.

“It was something I was thinking about for years. For myself, it was a matter of coming to the monastery and not just staying for a day or a week but over the course of time when you live this life you begin to see the wisdom and the life in action… it is something you have to try to see.”

The novice said his family would “always have been supportive of anything I tried to do” and that they “always knew that vocation was a possible life decision for me”.

For the youngest member of the community, 27-year-old Bro Elijah, his family were not supportive.

“My family is not catholic, they are Lutherans. I became a catholic in high school and it was early college when I made the decision to join a seminary.” It was a source of rupture and even to this day a source of grief.

However, he told CatholicIreland.net, “I am in regular conversation with my parents and my family; they know I love them and I know they love me but it is very difficult when a family isn’t on the same page.”

Dom Elijah like Dom Finian is a novice. He will make his vows next year. “I have taken no vows – I could walk out if I wanted to and if something went wrong I could be dismissed. Right now everything is going well and I’m happy and planning to stay.”

The Tulsa native originally became a seminarian for his home diocese but thanks to the amount of time he spent “going back and forth” between the monastery in Tulsa and the university he “became part of the furniture” and was drawn to contemplative cloistered monastic life.

The Benedictine monks of Silverstream live their vocation under the Patronage of Our Lady of the Cenacle and have a special dedication to the sacred liturgy.

When Dom Benedict, who was a member of the Tulsa community, pronounced his vows last year, he was the first Benedictine monk to be professed in Meath since the dissolution of the Abbey of Fore by the commissioners of Henry VIII in 1539. 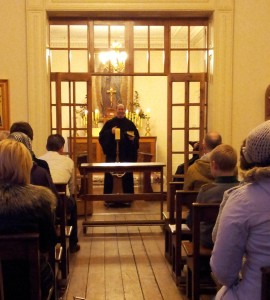 The monks have a number of young men both from Ireland and the US interested in joining the community but the monastery is badly in need of renovation in order to accommodate more men.

Dom Benedict was born into a Danish-Irish-American family which were culturally Catholic. “I came from an unchurched catholic background. I was baptised but I was never brought back to church. Through a lot of study and many trials and tribulations I came back to the catholic faith.”

For many years, he was a member of the Eastern Orthodox church. “I was an eastern orthodox seminarian and studied at the Russian orthodox seminary of St Vladimir’s in New York. Through the discovery of this monastery I came back to the faith of my baptism and just became enchanted with the Benedictine life – and that is how I came to join,” he explained.

He told CatholicIreland.net that the monks normally we would not go out and about but there are exceptions.

“Last week I was in Denmark with a group of young Catholics who asked me if I would come out and celebrate Mass and give them a sermon on the Immaculate Conception. I did that – so there are exceptions but normally we would not do things like that.”

The invitation from the young Danish Catholics came through a 23-year-old Dane who comes to prayer and reflect at the monastery in Stamullen.

“He is a very deep young man and when he decided to search for God, he came to Co Monaghan to do a course in horticulture and someone talked to him about Harrington Street. They said you need to go to the monastery to make a retreat for your baptism… so this lad arrived, so fresh and open.”

“He lived with us and shared our lives and then was baptised and has kept coming back. In Denmark he is part of this circle of friends – young converts to Catholicism who are full of enthusiasm for the faith.”

Dom Mark Daniel Kirby sums up a nature of the monastery as like a hearth – “A hearth gives fire and light – warmth and light – wherever there is a monastery, people are drawn, in the way that they were drawn to sit around a hearth in the past.”