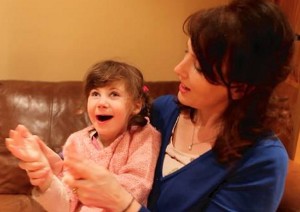 Tracy Harkin with her daughter Kathleen

Sinn Féin seems to be rushing to follow the British abortion model, which has led to a culture where 90% of babies with a disability are aborted before birth according to Every Life Counts, a group supporting parents of children diagnosed with a terminal condition.

Tracy Harkin made her comments in advance of the Sinn Féin Ard Fheis this weekend where abortion was hotly debated.

Four motions were put, three in favour of extending abortion law, in particular in the case of fatal foetal abnormality.

A pro life motion (No 123) from Cork calling for all children “diagnosed with fatal illnesses or disabilities before they are born to receive the full protection of the state,” and “abortion should not be permissible under law in these circumstances” fell when an earlier motion calling for abortion for fatal foetal abnormalities, and the introduction of an all Ireland protocol on pre-natal diagnostic screening in pregnancy” was passed.

Ms Harkin pointed out that a recent parliamentary inquiry, the Bruce Inquiry, had shown that parents came under pressure to abort where the baby had a disability.

“What parents and their children need is a model of best care, a model which supports families and gives them time to make memories and to show love. That is what leads to healing,” she said.

Ms Harkin said that many children with life-limiting conditions had too-short lives, but that their lives had meaning and that these babies brought great joy and love to their parents.

“For me, especially as a mother of a little girl with Trisomy 13, it is very disturbing to consider the reality of what is being proposed.”

“The simple fact is that abortion is not just a matter of choice, and these are usually late-term abortions of babies with a profound disability. There is huge trauma attached to it for both the mother and the baby. It is not the progressive answer to a severe disability: our babies were not ‘better off aborted’,” she said.

The Sinn Féin party delegates also supported a motion to repeal the 8th amendment which guarantees to respect, and, as far as practicable ” to defend and vindicate” the right to life of the unborn. 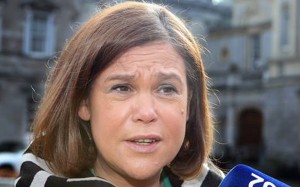 She agreed it was the right of women and their partners and families in this situation to have “full care…… every support and, above all, choice”.

Caoimhghín Ó Caoláin, the party’s health spokesperson also supporting the motion to allow abortion for fatal foetal abnormality, said it was long past time that the party “faced up to its responsibility” where a couple is confronted by this tragedy.

One man spoke against the motions saying “just because other parties rush this [issue], doesn’t mean we have to”.

He said no one had the right to end the life of a child.