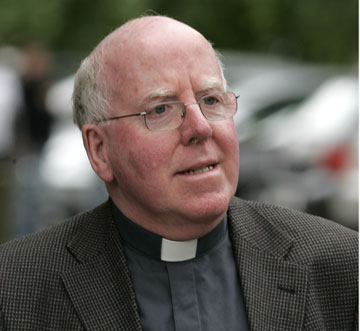 Bishop John McAreavey of Dromore on Thursday strongly criticised Sinn Féin party political literature which quoted his name and misrepresented the pro-life position of the Catholic Church to its constituents.

In a statement, Bishop McAreavey said he became aware of party political literature which was jointly issued in the names of Sue Ramsey MLA and Councillor Matt Garrett of Sinn Féin.

It stated that the Bishop of Dromore shared their position on the “termination” of unborn human life.

“This is an untrue and most damaging assertion,” the Bishop stated and added that he was “appalled”.

“I cannot emphasise enough the seriousness of this action which has misused my good name and impugned the teaching reputation of my ministry as bishop.”

He said political representatives must answer for their own position on abortion and they should not try to misrepresent the pro-life position of the Catholic Church to their constituents.

He said he greatly appreciated the interventions of the NI Deputy First Minister, Martin McGuinness, and he accepted the apology outlined in West Belfast MP, Paul Maskey’s statement.

Referring back to the party political literature, Bishop McAreavey said “this inaccurate publication does not represent the moral teaching of the Church nor does it add credibility to the political process.”

He said the importance that the Catholic Church accords to the protection of human life cannot be politically misrepresented.

“By virtue of their common humanity, a mother and her unborn baby are both sacred with an equal right to life.”

“Last year, in the context of the abortion act which was debated and passed in the Dáil, our pro-life message was vigorously promoted across the island. Therefore, how any political party could be mistaken about the pro-life position of the Church defies belief,” he concluded.