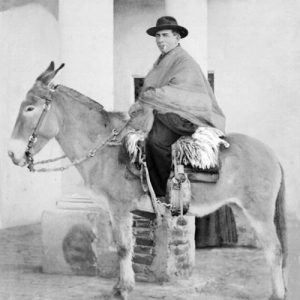 Pope Francis canonised seven new saints – two of them martyrs – at a Mass in Rome on Sunday.

Three of the seven are from the Spanish speaking world: José Gabriel del Rosario Brochero from Argentina; José Sánchez del Río from Mexico, and Manuel Gonzalez from Spain. Two are French and two are Italian.

The first of the Hispanics is known in Argentina as ‘the gaucho priest’, and is said to closely embody the Pope’s vision of priesthood. For more than fifty years, Cura Brochero travelled on the back of a mule around the far-flung province of Cordoba in Argentina, building church schools and opening roads between the mountains. On Sunday, Francis described him as “A shepherd who had the smell of his sheep.” Previously, while leading a retreat for Rome’s diocesan priests, Francis quoted Brochero as saying: “The priest who has scarce pity for sinners is only half a priest. These vestments I wear are not what make me a priest; if I don’t have charity in my heart, I am not even a Christian.”

José Sánchez del Río was one of two martyrs canonised. He was only 14 years old when he was executed in 1928 by soldiers loyal to the anti-clerical regime of President Elias Callas.

Spain’s newest saint, Manuel Gonzalez, is the former Bishop of Palencia. Such was his devotion to the Eucharist that he was known as ‘the Bishop of the Tabernacle’. He died in 1940.

Two of the new saints of the Church are French. Salomone Leclercq was a member of the La Salle order when he was martyred in 1792 in the anti-clerical terror that followed the French Revolution. The other French saint is Elizabeth of the Trinity, a mystic who died aged 26 from Addison’s disease in 1906, at a time when there were was no cure for the illness. Despite being in severe pain, the Carmelite sister accepted her suffering as a gift from God and her last words were “I am going to light, to love, to life!”

There are now more than 10,000 officially recognised saints of the Catholic Church, but of course there are countless more saints in heaven. As followers of Christ, we are all called to sainthood.