Home > Featured > Seven to be canonised in Rome today 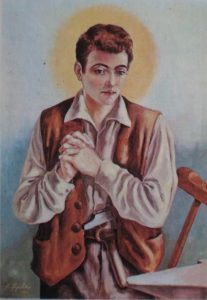 The Church will have seven new saints today.

Pope Francis will canonise Pope Paul VI; Oscar Romero, the martyred archbishop of El Salvador; Fr Francesco Spinelli of Italy, founder of the Sisters Adorers of the Blessed Sacrament; Fr Vincenzo Romano, who worked with the poor of Naples until his death in 1831; Mother Catherine Kasper, founder of the Poor Handmaids of Jesus Christ, a religious congregation headquartered in Germany; and Nazaria Ignacia March Mesa, the Spanish founder of the Congregation of the Missionary Crusaders of the Church.

The seventh candidate for saint hood is Nunzio Sulprizio, an Italian who died aged 19 in Naples in 1836. Blessed Nunzio Sulprizio was added in June to the list of those to be canonised today, with Pope Francis declaring that he would like to canonise a teenage saint during the month-long meeting of the world Synod of Bishops on Young People.

An orphan from early infancy, Sulpurizio was raised by his maternal grandmother until she died when he was nine. An uncle became his guardian and he had the boy work for him in his blacksmith shop, but the work proved too strenuous for him and a leg problem became gangrenous. In hospital, he suffered great pain with patience and serenity and offered up his sufferings to God.

Most media attention will be focused on the canonisations of Pope Paul VI and Archbishop Romero and what they say about the Church and the Papacy today. Born in 1897, the son of a lawyer, journalist and parliamentarian, Giovanni Battista Montini became the pope responsible for implementing the recommendations of the Second Vatican Council and, as such, he was the first pope to attempt to reform the curia. He was the first pope to hold general audiences, meeting ordinary people on a regular basis.

Archbishop Romero is an inspiration to those who strongly believe in the Church’s mission of promoting justice and peace. Originally identified as a conservative, the Archbishop was executed for speaking up for the rights of the poor and against the brutal violence inflicted on them when they demanded their rights. Notably in June 1978, Pope Paul VI met Romero and told him to “proceed with courage” in defending human rights.