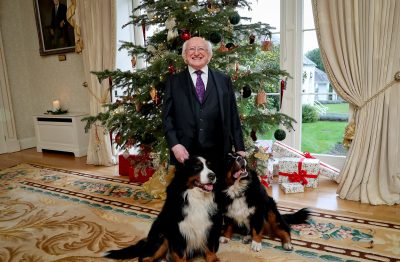 President Higgins with his dogs, Bród and Síoda. Photo: Maxwell’s

In his annual Christmas and New Year message, President Michael D. Higgins asks the Irish nation to be more hospitable to immigrants and asylum seekers and to resolve to work together to combat the effects of climate change.

In his text, the President makes no overt reference to the religious significance of Christmas: the birth of Jesus, our Saviour. Rather, the President declares that the central theme of Christmas is “the story of Mary and Joseph seeking refuge in Bethlehem for themselves and their unborn child and being told repeatedly that there was no room at the inn”.

Recalling Ireland’s own long history of emigration, of leavings and of exile, the President says that remittances sent home by our emigrants during times of great poverty and hardship were key to the construction of the Ireland of today.

Now, many are turning to Ireland for protection and shelter for themselves and their families, said the President. He asked: “Do we dismiss them from our door, telling them there is no room at our inn, or do we greet them in a spirit of hospitality bearing in mind the history of emigration that is such a defining characteristic of the Irish people?”

Turning to the issues of climate change and biodiversity loss, the President said it is clear that we must do much more to avoid catastrophe.

“Governments have a key role in leading the necessary change,” he said. “However, if we are to succeed in meeting this greatest challenge we must all act as a global community.

“What may seem small individual actions can make a big impact cumulatively on our carbon emissions. Therefore, as we begin a new year, let us determine to reduce our carbon footprint and become more aware of how our actions can damage our planet’s fragile biodiversity. This is an issue of justice for the future generations who will inhabit our planet.”

Calling on Irish citizens to walk in solidarity with the vulnerable in Ireland and across the world, the President concluded his seasonal message by saying: “It is that solidarity that has always given strength to the beating heart of our society, seeking to draw from all that is best about our Irishness and thus helping us to meet the challenges of the complex world in which we live.

“I wish each and every one of you a peaceful and happy Christmas and a new year of hope and possibility.”