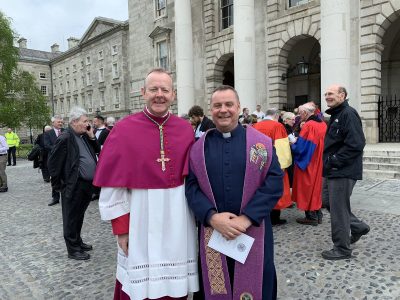 The head of the Catholic Church in Ireland has urged students at Trinity College Dublin to make a difference and use their talents to get “stuck in” to the problems of the world.

Archbishop Eamon Martin of Armagh gave the homily at the Trinity Monday Service of Thanksgiving and Commemoration at TCD chapel, where he was joined by staff, students and the public.

In his address, the Primate of All Ireland told the congregation, “The young people who study here at Trinity have the gifts and the capacity to change the world.”

He said they must seek to be remembered for making a difference and that they could weep before the tragedies and harsh realities of life.

“… you did not stand back; you used your talents and ‘got stuck in’ to the problems of the world, tackling at the same time any inconsistencies in your own values and behaviour.

“Seek to be remembered because you saved lives – even one life – by your empathy, your words, your actions; leave your mark as a leader who inspired others, pointing them ‘to the truth’; and, because you made a personal, merciful impact on someone else which helped to change that person’s life for the better,” Dr Martin exhorted.

Referring to Trinity Week, he said it began with acknowledgement and celebration, commemoration and thanksgiving.

As the service was taking place, TCD was announcing its new Honorary Fellows, Fellows and Scholars.

“Friends, on a day like this we rightly celebrate the wealth of talents, scholarship and opportunity that this College represents,” Archbishop Martin said.

He also recalled those who had died, especially over the last year.

“By honouring the distinguished figures of the present and past, we hope to inspire new generations of Trinity scholars. We point them to models of scholarship, loyalty and generosity,” he said.

He recalled Pope Francis’ announcement four years ago of a Year of Mercy, when the Pope said it was obvious that today’s world is in need of mercy and compassion, or rather of the capacity for empathy.

“We are accustomed to bad news, cruel news and the worst atrocities that offend the name and the life of God. The world needs to discover that God is the Father, that there is mercy, that cruelty is not the way … I believe that this is the time for mercy”.

Describing weeping as an expression of mercy and compassion, the Pontiff had urged people to question themselves if they could weep when they see a child who is starving, on drugs or on the street, homeless, abandoned, mistreated or exploited as a slave by society.

Archbishop Martin said that last week in his home city of Derry “I witnessed people weeping on the streets after the violent death of the young journalist, Lyra McKee. Their tears gave way to a call for action, to an outright rejection of violence and to a hopeful renewal of all-party talks.

“Tears have also been flowing in abundance this past week in Sri Lanka following the horrific slaughter of innocent worshippers and tourists, including many children, on Easter Sunday morning.

“These tears must move all of us to value the freedom of worship and religion and to work to combat the hatred and extremism that gives rise to such attacks.”