Home > Featured > ‘The scale of the conflict & casualties should scare us’

‘The scale of the conflict & casualties should scare us’ 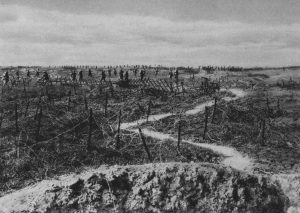 Our calling as Christians is to champion an outlook that builds bridges, that includes rather than excludes, that welcomes rather than alienates, and that fosters reconciliation, justice and peace.

In his sermon at a Service of Peace and Reconciliation to commemorate the centenary of the Battle of the Somme in St Fin Barre’s Cathedral in Cork, Bishop Paul Colton said on Friday we are called to “Showing, manifesting, making real, putting into practice, passing on, sharing … that love is our calling in our time”.

The Bishop of Cork said hearing that simple message against the backdrop and within the context of our commemoration of the “ghastliness, human horror and tragedy of war, on this centenary of the first day of the Battle of the Somme, should energise us as we tackle the challenges and, indeed, confront head on the evils of our own day, some of them uncomfortably redolent of a history that risks repeating itself.”

He acknowledged that religion and religious profession have been used in history both to divide and to unite.

“That confronts us too in our own religious practice; the Christian calling is clear in tonight’s Gospel reading,” he said referring to the reading in which Jesus tells his disciples ‘the greatest love of all is laying down down one’s life for one’s friends’.

Bishop Colton highlighted the scale of the conflict and the casualties, and said the horror of human suffering, on all sides “should scare us”.

He said that in visiting the Western Front it is important and potent to visit the German cemeteries too.

“At Fricourt, and later at Langemarck, I found it moving to see some Royal British Legion crosses and wreaths laid there too, together with the personal messages of reconciliation from visitors with connections to the allied forces.”

Dr Colton drew from recent TV coverage of the centenary events to sum up the sheer scale of death recalling the words of Baroness Shirley Williams who said ‘This is the day when Europe destroyed its younger generation.’