Summary : St Nicholas, Bishop died in the fourth century. He was the Bishop of Myra (Turkey) but nothing more is known about his life. Since the tenth century, widely venerated and frequently claimed as a patron in both East and West, his cult in the West was further ensured when his relics were moved from Myra to Bari (Italy) in the eleventh century. His reputation for generosity led to the custom of giving children gifts on his feast day, and thus to the Christmas figure of Santa Claus.

There are many stories about St Nicholas, especially about how how he became the original ‘Father Christmas’ – ‘Santa’. He is also patron of pawnbrokers and sea travellers. Nicholas wasn’t above getting into a fight; they say he slapped the Alexandrian priest Arius at the Council of Nicea for denying the divinity of Christ and wasn’t too bothered that the other bishops put him in prison for it .

Children the world over are familiar with the red costume and the white flowing beard, but few, perhaps, know the true origin of our modern-day Santa Claus.

John Murray PP tells some of his story.

Stories and fables
In the Middle Ages, St. Nicholas was very popular. His cult was particularly strong in Russia, where he became the national patron, and several of the Tsars were called after him. He is also patron of Greece and Sicily and Lorraine in France. He also became known as the patron of travellers, since it was claimed that in his early life he had travelled to Egypt and the Holy Land. It was for his kindness and charity, however, that Nicholas became well known, and these in turn gave rise to the modern stories and fables.

Acts of charity
His parents had died when he was young, and Nicholas determined to devote his inheritance to works of charity, for he had been left fairly comfortably off. An opportunity soon arose, for a citizen of the local area had three daughters. This man was unable to raise the necessary dowries in order to marry them off, for he was extremely poor. The danger was that they would be sold off into the world of prostitution.

Nicholas heard of this and at night he threw a bag of coins in the open window of the man’s house. The eldest girl was soon married. At intervals, when the time came, he did the same for the second and third daughters. It was on the last occasion that the father spotted his benefactor, and overwhelmed him with his gratitude. Interestingly, the story of the three bags of gold or money gave rise to the tradition of the three gold balls outside a pawnbroker’s shop!

Message of Christmas
The real Nicholas was indeed generous with the goods of this world, as we have seen, and so, in time, his name became legitimately associated with the whole Christmas tradition of gifts and giving. He contributed to defending the great message of Christmas, however, in another, totally different, way. 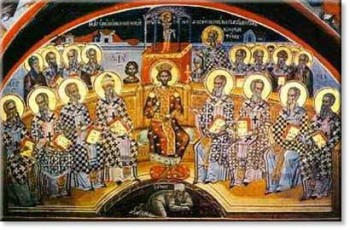 The story is that Nicholas was present at the great Council of Nicea, which debated the issue of the nature of Christ. A priest of that era, Arius, had denied the divinity of Christ. Jesus was not God in the same way as the Father was God, he said, but was created by him. Nicholas saw that the message of Bethlehem and Calvary was being diluted. He called the heresy of Arius, which had given rise to the Council, ‘death-dealing poison‘. It is said that he even slapped Arius in the face, so strong was his feeling about this dogma!

The Council Fathers temporarily deprived Nicholas of his Episcopal insignia and placed him in prison for many years, but Our Lord and Our Lady appeared to him there. He felt vindicated, and would have regarded the imprisonment as a minor privation for having been able to save the true message of Christmas.

Resting place
Nicholas died and was buried in his episcopal city of Myra, and by the middle of the fourth century there was a magnificent cathedral in his honour at Constantinople. When Myra and its great shrine passed into the hands of the Saracens, however, several Italian cities saw it as an opportunity to acquire the relics of the saint for themselves.

There was great competition between Venice and Bari, and the latter won. On 9 May 1087, the remains of St. Nicholas came to rest in this Italian city, which had a large Greek colony. A new church was built to shelter them, and Pope Urban II was present at their enshrining.

Story of persecution
A thousand years later, and another Pope was also present in Bari. Pope Benedict XVI, elected on 19 April 2005, chose Bari – and the Italian National Eucharistic Congress – as the opportunity for his first trip outside the Vatican since his election. The day was 29 May, and the feast was Corpus Christi. Pope Benedict chose the occasion to talk about a story from the early Church, when Christians were often persecuted for practising their faith.

The year was AD 304, and the persecution under the Emperor was at its height. In the town of Abitene – in modern-day Tunisia a group of forty-nine Christians were interrogated about their practice of celebrating the Eucharist. The local magistrate asked Emeritus, in whose house the Mass was celebrated, why he allowed this to happen.

The latter replied, ‘Because they are my brothers and sisters, and I was not able to prohibit them’. The magistrate continued, ‘But that would have been your duty according to the law’. Then Emeritus responded with a phrase that rings true even after seventeen centuries: ‘I could not, because without Sunday we cannot live’. Emeritus and his friends paid for their fidelity with their lives.

Nickolas’ Reflection on: The greatest gift of all time
Nicholas knew that when God gives us himself it is always a total gift. The baby in Bethlehem and the man on the cross on Calvary were truly Jesus Christ, the Son of God. And when he said, ‘This is my body… This is my blood,’ he was offering us nothing less than the life of God himself. The man who gave generously to others, the bishop who opposed Arius, the saint who celebrated the Eucharist, he knew that every Sunday is a gift of God. 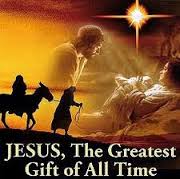 As Benedict XVI, Bishop of Rome also said on that 29 May, ‘to participate in the Sunday celebration and eat of the Eucharistic bread is a need for every Christian who can so find there the energy he needs for the journey of life’. St Nicholas realised so well that God gave the very first Christmas present, and that he gives it over and over again in every Mass.

This article first appeared in The Messenger (December 2005), a publication of the Irish Jesuits.