Summary: Catholicism came to Korea almost totally by lay evangelisation. The canonisation of the Korean martyrs by Pope John Paul II in 1984 was the first to take place outside of Rome. 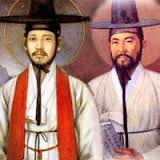 First Christian presence
The first known Christian presence in Korea was a Portuguese Jesuit priest, Father Gregorius de Cespedes, who arrived in Korea in 1593 to work among Japanese expatriates, but he was not allowed work with Koreans. A decade later, however, the Korean diplomat Yi Kwangjong came back from Beijing with a world atlas and several theological books written by the Jesuit missionary to China, Matteo Ricci. Ricci’s books provoked intense academic controversy over Christian beliefs through the next two centuries.

The Silhak School
Members of the Silhak (meaning “practical learning”) school, a Confucian social reform group in Korea were quite sympathetic to Christianity. They saw Christianity as providing an ideological basis for their own beliefs. They admired the egalitarian values of Christianity and its social structure based on merit rather than birth. Silhak scholars were often bitterly opposed by the establishment. But when Catholicism was finally established in 1784, there was already a substantial body of educated opinion sympathetic to it and this helped the later spread of the Catholic faith there, since many Catholics had family ties to the Silhak school.

Lay leadership
Christianity began in Korea as an indigenous lay movement, and was not imposed by a foreign ecclesiastical hierarchy. The first Catholic prayer-house was founded in 1784 in Pyongyang, now the capital of North Korea, by Yi Sung Hun, a diplomat who had been baptised in Beijing. In 1786, Yi established a hierarchy of lay-priests and although the Vatican later ruled that the appointment of lay-priests violated Canon Law, lay indigenous leadership remained quite strong.

Fr Andrew Kim Taegon
Kim Taegon was Korea’s first Roman Catholic priest. Born in 1821, he took the Christian name of Andrew when he was baptised at the age of 15.  His parents were converts too and his father Ignatius was martyred in 1839.  Kim travelled 1,500 miles to study at the seminary in Macau.  After six years he managed to return to Korea through Manchuria. That same year he crossed the Yellow Sea to Shanghai and was ordained a priest. He returned to Korea and just one year after his ordination, he was arrested, tortured and at the age of 25 was finally beheaded on 22nd September 1846 at the Han River near Seoul. 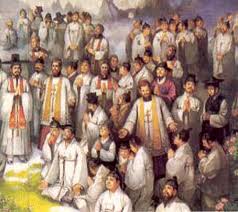 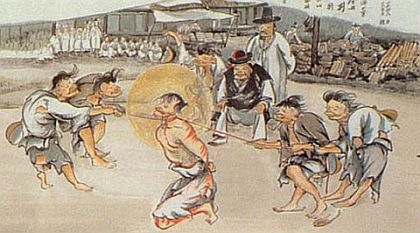 said: “The Korean Church is unique because it was founded entirely by lay people. This fledgling Church, so young and yet so strong in faith, withstood wave after wave of fierce persecution.  Thus, in less than a century, it could boast of 10,000 martyrs.

The death of these martyrs became the leaven of the Church and led to today’s splendid flowering of the Church in Korea.  Even today their undying spirit sustains the Christians in the Church of silence in the north of this tragically divided land.”

Faith in action
Father Andrew Kim Taegon said: “We have received baptism, entrance into the Church, and the honour of being called Christians. Yet what good will this do us if we are Christians in name only and not in fact?”

How did the people of Korea survive without the Eucharist?  It is important to realise that there must be a living faith before there can be a truly beneficial celebration of the Eucharist. The sacraments are signs of God’s initiative and a response to faith already present. The sacraments increase grace and faith, but only if there is something ready to be increased.

Today
The Church today is flourishing well in South Korea, but remains underground in the North.