Summary of the feast of the Chair of Peter. The chair (cathedra) of a bishop is a pre-eminent sign of his teaching authority and pastoral oversight of a local Church. This feast, observed in Rome since the fourth century, celebrates Peter, first among the apostles, as founder of the See of Rome and the focus of unity in the communion of one faith. 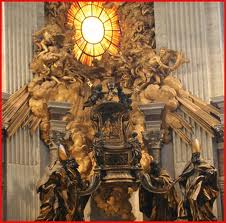 Altar of the Chair of St Peter
In the apse of the Basilica of St Peter’s in Rome, underneath the beautiful alabaster window with the dove as symbol of the Holy Spirit (see image), is an altar carved in 1666 by Gian Lorenzo Bernini called the Altar of the Chair of St Peter. The altar is in the form of a throne supported by figures of the four Fathers of the Church. It contains pieces of acacia wood, said to have been the chair from which St Peter taught, but in fact was a gift from Charles the Bald to the Pope in 873. 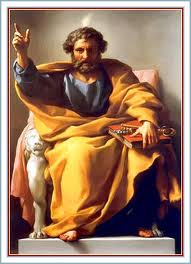 There have been two feasts of the Chair of Peter, one associated with Antioch and the other with Rome and these two feasts remain in the 1962 Roman Missal of Pope John XXIII, recently allowed by Pope Benedict XVI in the motu proprio Summorum Pontificum (2007) as an extraordinary form of the Roman Rite. The ordinary form of the revised Roman Calendar (1969) has just one for 22nd February entitled “The Chair of St Peter”. The Chair is regarded as a metaphor for the episcopal office of the Pope as Bishop of Rome.

A catechesis of the Petrine ministry
The texts for the Mass and the Liturgy of the Hours of the feast serve – if a trifle ideologically – as a catechesis on the role of the apostle Peter, stressing the place of a Petrine ministry of authority. This finds its best expression in the Preface to the Eucharistic Prayer:

‘With remarkable wisdom the Church was prefigured in the Old Testament
and when the time was fulfilled, you established it on the foundation of the apostles.

From among them you chose Peter, who was the first to recognise the divinity of Christ,
and you made him the solid rock on which your Church would be built.

You have constituted him as guide and custodian of your entire flock
so that throughout the centuries he could strengthen his brethern.

Your Son gave him the keys of the kingdom of heaven
so that whatever he decided on earth, you, O Father, would ratify in heaven.’

One of the characteristics of the Catholic Church is its unity, that it is one, and the guarantee of that unity is the fact that the Church is hierarchical. The phrase ubi episcopus, ibi ecclesia (“where the bishop is, there is the Church”), traditionally ascribed to St Ignatius of Antioch (d. 107), sums up Catholic teaching on this point. It is the principle which guarantees the validity of the sacraments and other liturgical actions. 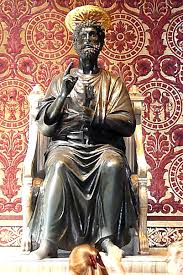