Sep 8 – The Nativity of the Blessed Virgin Mary

Summary: The Catholic Church observes the actual birthday/date of only two saints: Saint John the Baptist (June 24), and Mary, Mother of Jesus (8th September). In the case of all other saints, especially martyrs, they are venerated on the day of their death, which is called their ‘dies natalis’, or “birthday”, meaning “the day of their birth into heaven”.

Patrick Duffy touches on the theme of joy and some of the history of this feast.

The joy of the feast 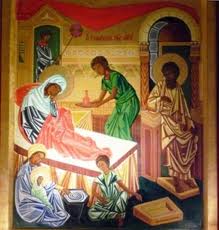 The Benedictus antiphon at Morning Prayer sums up the joy of this feast:
Your birth, O Virgin Mother of God, announced joy to the whole world, for from you has risen the Sun of Justice, Christ our God. He released us from the ancient curse and made us blessed; he destroyed death and gave us eternal life. 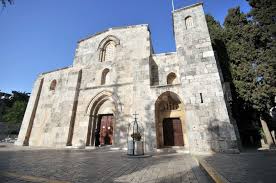 Origin in St Ann’s Basilica, Jerusalem
The origin of the liturgy of this feast can be traced to the consecration of the church in Jerusalem in the 6th century that has been traditionally known as the Basilica of St. Ann, the mother of Our lady. The original church built in the 5th century was a Marian basilica erected on the spot known as the shepherd’s field and thought to have been the home of Mary’s parents. After its destruction and reconstruction in the 6th century, it was named in honor of St. Ann.

Introduced to Rome
By the 7th century the liturgy of the feast was introduced to Rome by monks from the East, where Pope Sergius I (687-701) solemnised it with a litania, that is, a procession with prayers. The procession went from the Roman Forum to the Basilica of St. Mary Major’s.

The date
The date, 8th September, was chosen as the 8th day (an octave) after the start of the Byzantine New Year and although it was celebrated on various other dates through the centuries, 8th Sept. predominated. Later, the feast celebrating Mary’s Immaculate Conception, was set to correspond with it, nine months beforehand, on 8th December.

Mary is the Ark of the New Covenant
In the East, Mary’s birthday is celebrated as one of the twelve great liturgies. The title for the liturgy in the East: “The Birth of Our Exalted Queen, the Birthgiver of God and Ever-Virgin Mary”. The oldest existing sermon for the liturgy was written by St. Andrew of Crete (660-740):’Today a shrine is fashioned for the world’s creator. Today a new dwelling is readied by creatures for the author of all creation’.

The present feast forms a link between the New and the Old Testament. It shows that Truth succeeds symbols and figures and that the New Covenant replaces the Old. Hence, all creation sings with joy, exults, and participates in the joy of this day. … This is, in fact, the day on which the Creator of the world constructed His temple; today is the day on which, by a stupendous project, a creature becomes the preferred dwelling of the Creator. 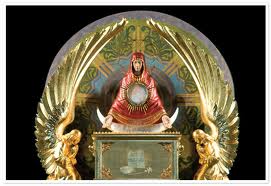