Aug 15 – The Assumption of the Bl. Virgin Mary

Summary: The Assumption of Our Lady.  From the earliest centuies there have been stories, traditions and artistic impressions of what the Assumption of Our Lady could mean. The feast itself originated in Jerusalem before the fifth century as the “Falling-Asleep of the Mother of God.” It was adopted in Rome in the mid-seventh century and was renamed the “Assumption” in the next century.

Patrick Duffy gives some of the background here.

The Solemnity of the Assumption of Our Lady celebrates Mary’s entry into heaven. In Irish, 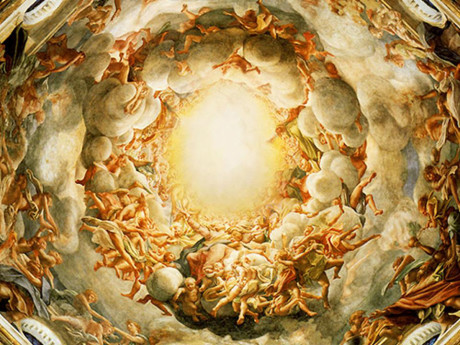 it is called Lá Fhéile Naomh Muire san Fhómhar, that is, “The Feast Day of Our Lady in the Harvest Time“. This theme is expressed in the liturgy of the day.
(The image  right is The  Assumption of Our Lady by Antonio Corregio)

Eastern theology has tended to focus on the dormition or “going to sleep” of the mother of God.

The Dormition of the Theotokos
Although the New Testament does not make any reference to the last days of her life, celebrations of Mary’s death, called her “Going to sleep” (Greek koimesis / Latin dormitio), began to appear from the 4th to the 6th centuries. From the 6th century, the Great Feast of the Dormition of the Theotokos was celebrated on 15th August throughout the Byzantine 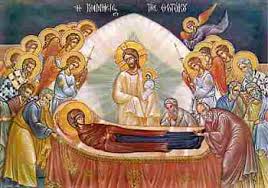 Empire, probably beginning from Jerusalem where there was, and still is, a church called the Tomb of Mary. (See image right which shows Mary lying on a bier while Jesus receives receives her soul into heaven).

In the West, the Roman sacramentaries (Gelasian and Gregorian) have prayers for Masses for the Dormition of Our Lady for the same day, indicating that the feast was celebrated in Rome during the 7th century.

Different spiritualities
However, the spiritualities of East and West took a somewhat different focus. Eastern spirituality had no doubt that Mary died, that Jesus resurrected her on the third day and then brought her to heaven. Later Roman Catholic piety tended to the opinion that, since death is a consequence of sin, it would have been more fitting, in the case of Our Lady, that her freedom from original sin and from personal sin would have protected her from the general law of death (argumentum ex congruentia or suitability, fittingness).

Munificentissimus Deus
On 1 November 1950, Pope Pius XII in the Apostolic Constitution Munificentissimus Deus, defined the Assumption of Mary into heaven as a divinely revealed dogma, saying “that the Immaculate Mother of God, the ever Virgin Mary, having completed the course of her earthly life, was assumed body and soul into heavenly glory”. However, this left open the question of whether Mary died before her Assumption. But the more common opinion of the early Fathers was that she did die.

Preface of the Mass
The core of Catholic faith is expressed in the Preface of the Mass for Solemnity of the Assumption:
‘Today the virgin Mother of God was taken up into heaven
to be the beginning and the pattern of the Church in its perfection,
and a sign of hope and comfort for your people on their way.

You would not allow decay to touch her body,
for she had given birth to your Son, the Lord of all life,
in the glory of the incarnation.’

The Readings
The first reading for the Solemnity from the Book of Revelation 12:1-6 sees Mary as united with the victory of Christ:

‘A great sign appeared in heaven: a woman clothed with the sun, the moon beneath her feet, and a crown of twelve stars on her head…. Victory and power and empire for ever have been won by our god, and all authority for his Christ.’

The second reading 1 Cor 12:20-26 explicitly mentions Jesus as the “first-fruits”, giving hope that we will be included in the rest of the harvest.

Harvest
Traditional Irish piety saw Mary as Queen of the Harvest. Like her son Jesus, she is a kind of “first-fruits” and we, the faithful, hopefully, are the rest of the harvest. Patrick Kavanagh gives beautiful expression to how he hoped to participate in this harvest in one of his early poems, entitled I May Reap. 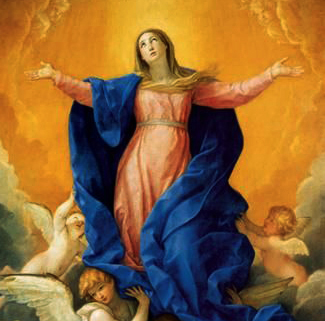 I who have not sown,
I too
By God’s grace may come to harvest
And proud
As the bowed
Reapers
At the Assumption
Murmur thanksgiving.

Popular piety
Until recently, in Ireland and England, traditional pilgrimages to holy wells (Lady’s Well) took place on this day. Perhaps there was a connection with fertility and the harvest. But more recently the wells have not been tended and there are warnings not to drink the water!