Summary of St Winnibald. Three members of the same Anglo-Saxon family c/f the first image below – Ss Willibald (2nd left), their sister Walburga (centre) and Winnibald (right) – together with their maternal uncle St Boniface, played an important part in the evangelising of Germany.

A pilgrimage to Rome

Our story begins when Winnibald and his brother Willibald set out with their father from Hampshire, England, on a pilgrimage to Rome and the Holy Land. Their father died at Lucca, but the two brothers, despite dangers and difficulties, continued till they were able to give thanks for their arrival at the shrine of St Peter, Rome. 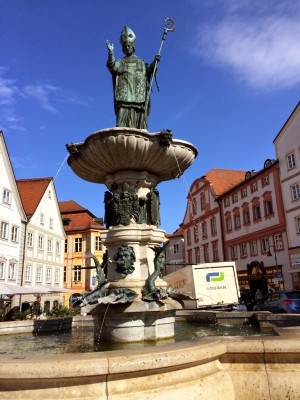 Winnibald in Germany
Winnibald caught the Roman summer fever and remained in Rome while his brother travelled on eventually reaching to the Holy Land. When Winnibald recovered, he stayed on for seven years in Rome  studying before returning to England. After some time, he again set out for Rome, this time with a group of companions. This time in Rome he met his maternal uncle St Boniface, who brought him with him to help in evangelising Germany. Ordained a priest in Thuringia, Winnibald was given charge of seven churches around Erfurt, but the Saxon inhabitants of that area forced him to move south into Bavaria where for some years he set up missions and then went went westward to join Boniface at Mainz.

A double monastery at Heidenheim 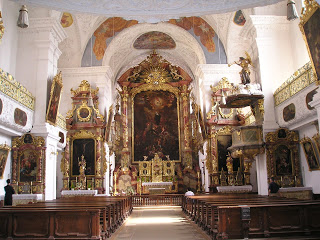 The glorious interior of St Walburga’s convent church in Eichstätt, next to her tomb

Willibald asked his brother Winnibald to start up a monastery at Heidenheim and made him its first abbot. This monastery followed the Rule of St Benedict and also became an important centre for the education of clergy. But another source of its fame was that it became the only double monastery among the 8th century foundations in Germany. Walburga, the brothers’ sister, came from the double monastery of Wimbourne (Dorset, England) and was the abbess of the female monastery. On her brother’s death she assumed full control of the double-monastery of Heidenheim.

Death and memory
Winnibald had hoped to die as a Benedictine monk in Monte Cassino, but illness prevented him from moving there and so he died at Heidenheim. His biographer was Hugeburc, a nun of Heidenheim, who also wrote the Hodoeporicon, an account, dictated by his brother Willibald, of his travels in Rome, Constantinople, Cyprus, Syria, Jerusalem and Palestine. It was the first travel book by an Anglo-Saxon.