Summary: St Vincent of Lérins was a monk at the start of the fifth century and is the author of a work called the Commonitorium

Patrick Duffy writes about him and his work. 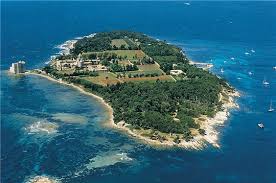 (The image to the left<< is of one of the Lérins Islands (in French les Îles de Lérins), a group of four Mediterranean islands off the French Riviera, near Cannes.
Here Saint Honoratus founded a monastery around the year 410. There is a tradition that Saint Patrick studied there in the fifth century. A Cistercian community lives there today in a monastery built during the nineteenth century.)

Monk at Lérins
Little else is known of the life of this St Vincent apart from his being a monk of the Lérins monastery. He refers to himself as a stranger and a pilgrim who had fled the world to serve Christ in the quiet of the monastery of Lérins.

The Commonitorium (dated 434),
Vincent was a monk at the start of the fifth century and is the author of a work called the Commonitorium, an important text in the development of doctrine, a word that means a kind of ‘memory aid’. In fact, the work is a practical handbook to help decide between what is true and what is false in Catholic doctrine. Vincent’s object is to provide himself, as he states, with a general rule whereby he can distinguish Catholic truth from heresy; and he commits what he has learned to writing, that he may have it by him for reference as a “commonitory”, or “remembrancer”, to refresh his memory. 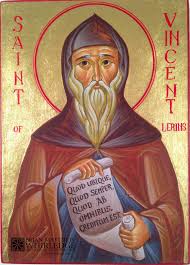 His guiding principle for sound doctrine
Vincent’s work develops practical guidelines for distinguishing heresy from true doctrine. The first criterion is Scripture, and if this does not suffice, then the tradition of the Catholic Church. Vincent’s famous principle was the source of much discussion at the time of Vatican I: “Let that be held which has been believed by all, at all times and everywhere … “ id teneatur quod ubique, quod semper, quod ab omnibus creditum est ). His work is referenced in the Dogmatic Constitution on the Catholic Faith of Vatican I.

Critique
Newman, however, considered this more as a negative or exclusive criterion than as a positive determination for the development of Catholic doctrine. Vincent probably used it in a Semi-pelagian sense reacting to some exaggerations of Augustine’s teaching on predestination. His disjunctive view of Scripture and Tradition has largely been overtaken by the Vatican II Constitution on Divine Revelation Dei Verbum: Scripture and Tradition are now seen in their unity and reciprocity. But it is still a useful formulary to express the unity of Catholic doctrine.