Summary: The sixth station of the Via Crucis (Stations of the Cross) is entitled:
“Veronica wipes the face of Jesus”.

A meditation accompanying this station reads: “As Jesus proceeds on his way covered with the sweat of death, a woman moved with compassion makes her way through the crowd and wipes his face with a towel. As a reward of her piety, the impression of his countenance is miraculously imprinted on the towel”.

Patrick Duffy looks at the devotion to St Veronica and its history. 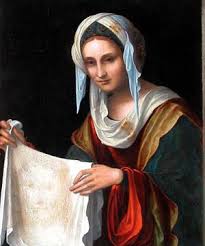 This devotion, popularised in the nineteenth century, has made Veronica into a well known saints. She even has a statue in St Peter’s Basilica in the Vatican. But it seems certain that she is a total legend coming from the very understandable desire to know what Jesus actually looked like, a desire to see the face of Jesus. No reference is made to Veronica or the towel in the canonical Gospels.

A relic of Jesus (a true image)
From the 8th century there existed at Rome a relic said to be a sudarium (or “sweat towel”) used to wipe Jesus’ face. By the 12th century claims were being made for a number of these that were said to have the image of the face of Jesus imprinted on them. Disputes arose as to which of these was the vera icon (or “true image”). Giraldus Cambrensis (1146-1223), a clergyman from Wales who visited Rome three times, gives evidence of this in his work Speculum Ecclesiae.

Veronica
Ordinary language turned this vera icon into veronica (or “the veronica”) and this lady is often identified with the woman with the haemorrhage cured by touching the hem of Jesus’s cloak (Mk 5:21-43), whom the apocryphal Acts of Pilate call Berenike. It was a short step from that to Veronica’s veil becoming an object of veneration in St Peter’s in the late Middle Ages. This is mentioned by both Petrarch and Dante. Pope Innocent III had it publicly displayed and granted indulgences for those praying before it.

Statue in St Peter’s
In the 17th century the veil was found hidden in a relic chamber built by Bernini into one of the piers supporting the dome of St Peter’s. By this time a more critical historical approach to relics had set in and St Charles Borromeo had  the Mass and Office of the Holy Face suppressed in Milan. But the shrine and a statue of St Veronica remain in the Basilica of St Peter’s in the Vatican till this day.

The mandylion of King Agbar of Edessa and the acheiropoietos icon
Another claimant to be the true image of Jesus from the East was the mandylion (“towel” or “handkerchief”) from Edessa in Syria, which was said to have been given by Jesus to his contemporary King Agbar of Edessa. This was at first reported to be a picture painted by the messenger who came requesting Jesus to come and heal him. But it later

developed into “an image not made by hands” (acheiropoietos) and in the 8th century became the justification of Eastern Orthodox iconography. John of Damascus, the leading proponent of the teaching favouring icons as opposed to the Iconoclasts, says that Jesus “is said to have taken a piece of cloth and pressed it to his face, impressing on it the image of his face, which it keeps to this day” (On the Divine Images I).

Conclusion
That a compassionate woman could have wiped the face of Jesus is not to be discounted. Christians are free to ponder such an action and its motivation. But St Veronica was not mentioned in any canonical gospel nor in any of the earliest martyrologies, nor is she named in the Roman Martyrology today. Neither does she currently have any liturgical celebration in the Catholic Calendar of the Universal Church.