Summary St Ultan was abbot-bishop at Ardbraccan in Co Meath, an important ecclesiastical centre in the middle ages. The image shown here is of the now de-consecrated Church of Ireland church at Ardbraccan.  Today the catholic parish is centred at Bohermeen, Co Meath. Ultan is also associated with the care of sick children.

Patrick Duffy looks at what is known about him.

Ultan is thought to have been a holy and learned man, possibly a pupil of St Declan, who founded a monastery and school at Ardbraccan, near Navan, Co Meath. Here he educated and fed poor students. He may also have illuminated manuscripts and written a life of St Brigid. He may also have been a bishop of the Desi of Meath. 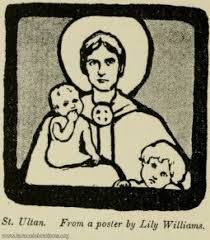 Care of sick children
During the yellow plague (Buidhe Ghonaill) which broke out not alone in Ireland, but also in England, Scotland, and many European countries at that time, St Ultan made a shelter for children who suffered from the plague and at one time had up to 150 children near his monastery.

The first baby’s bottle
He was original and inventive. The annals tell us he designed a feeding bottle using cows’ teats, which he filled with milk and put into the babies’ mouths with his own hands, probably the first mentioned baby’s feeding bottle on record.

“May Ultan’s left hand be against it”
Another story tells that once when a fleet of ships appeared on the coast with the evident intention of plundering the monastery, Ultan was holding something in his right hand so he made the sign of the cross with his left hand. Immediately all the ships sank like lead into the sea, and the sailors attempting to swim ashore were turned into rocks. Hence the old Irish saying, “May Ultan’s left hand be against it”, and there is a belief that had he used his right hand no foreign fleet would have ever been able to land in Ireland. 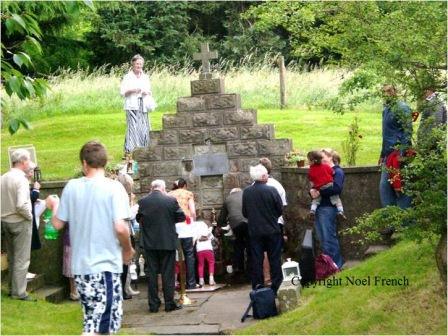 Bohermeen today
The Catholic parish today is centred at Bohermeen, where the church and the primary school are called after St Ultan. St Ultan’s feast is on 4th September.

St Ultan’s Infant Hospital, 37 Charlemont Street, Dublin (1919-1984)
Inspired by the story of St Ultan’s care for children, political activist Dr Kathleen Lynn established St Ultan’s Infant Hospital in 1919 at 37 Charlemont Street, Dublin, in response to socio-medical conditions in Dublin at the time. Many soldiers had come back from World War I with syphilis. Dr Lynn had been chief medical officer in James Connolly’s Irish Citizens’ Army and a Sinn Féin TD for County Dublin in the early 1920s. The hospital specialised in child-centred medicine, a new idea at the time. Every year the hospital organised a pilgrimage-cum-picnic to Ardbraccan, Co. Meath, the site of St Ultan’s well and his tiny church.