Summary: Théophane Vénard is famous for the fact that his letters inspired St Thérèse of Lisieux to volunteer to be a missionary Carmelite in Hanoi and become patroness of the missions. An inspiring missionary, he was beheaded when he refused to apostasise from his faith.

The son of a French schoolmaster, Théophane Vénard was born in 1829 in Saint-Loup-sur-Thouet. He joined the Society of Foreign Missionaries of Paris as a subdeacon from the seminary of Poitiers diocese. Ordained in 1852 he travelled the following autumn to Hong Kong. After two years learning Chinese, he was appointed to Tonkin (Vietnam), just as Christians there were being persecuted. He had a lot of sickness, but recovered each time. He was a devoted priest, often spending long hours in the confessional. 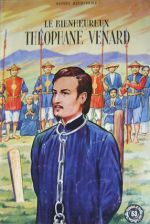 In 1859 the emperor Tu-Duc, determined to put an end to the “Jesus religion”, issued a new edict imposing the death penalty to priests, promised a reward to informants, and set out penalties for mandarins who were kind to Christians. Much of Théophane’s ministry was spent hiding in caves and sampans, but he was a cheerful spirit, learned the local language and got on well with everyone he met. He and another priest, Fr Castex, were received by a small community of Vietnamese nuns, the “Lovers of the Cross”, where he could celebrate Mass and continue his missionary activity through prayer.

Arrest, imprisonment, beheading and canonisation
In 1861 Theophane was finally arrested and imprisoned in a bamboo cage before being beheaded for his faith. In 1865 his body was returned to his congregation’s church in Paris, but his head remains in Tonkin. He was beatified with 19 other martyrs from Vietnam in 1909, and canonised in 1988.

Influence on Thérèse of Lisieux
Théophane’s letters and his example inspired the young St Thérèse of Lisieux (1873-97) to volunteer for the Carmelite nunnery at Hanoi. But she got tuberculosis and could not go. But because of her prayer for missionaries, she is regarded as patroness of missionaries.