Summary: Theodore of Canterbury began religious life as a Greek monk living in Rome who was sent by Pope Vitalian (657-672) to be the archbishop of Canterbury. Through making visitations, holding synods and through prudent administration, he brought order and peace to the Church in England.

Theodore was a 66 year-old monk of proven integrity, a native of Tarsus in Cilicia, who had been educated at Antioch and Constantinople. He was staying in Rome when Pope Vitalian, on the advice of the abbot Adrian, ordained him and appointed him to be archbishop of Canterbury.

His journey
Accompanied by the abbot Adrian, who had made the journey before, he set out in May 668 and, after passing to Marseilles, travelled overland through France, he arrived in Canterbury a year later.

An able administrator
Theodore made a visitation of the English Churches to see the situation for himself and appointed bishops to the various sees that had been vacant for some time.

Settled disputes
He had to mediate in a dispute between the hot-tempered Wilfrid, whom he appointed archbishop of York, and the rather milder and meek Chad, whom he had previously appointed to York, and now persuaded instead to become bishop of Lichfield. 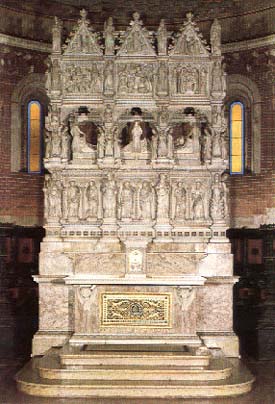 Organising synods
In 672 Theodore held the first synod of the Anglo-Saxon Church at Hertford and again at Hatfield in 675.

Founded school at Canterbury
He also founded an important school at Canterbury, where not only Latin and Greek, but also Roman Law and biblical exegesis were taught. He  encouraged the use of plainchant and the Roman way of calculating the date for Easter.

Death and influence
When he died, he was buried beside St Augustine, the first archbishop of Canterbury (597-604). Bede said of him:
“The Churches of England made greater progress during his pontificate than they had ever done before.“