Summary: St Stephen of Hungary, King. Born in Hungary about 975; died at Szekesfehervar on 15 Aug. 1038. As Duke of the Magyars, he established dioceses and monasteries and used state power to enforce Christianity. Crowned king of Hungary about 1000, with papal approval. He was noted for making Christianity the religion of his nation and for his care for the poor and oppressed.

Stephen  (11th century) was the first Christian   king of Hungary. He established a stable Christian culture in that part of Central Europe called the Carpathian Basin. 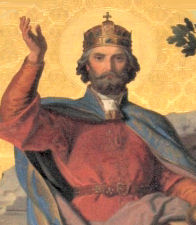 Born at Esztergom, Hungary, King Stephen of Hungary emerged as a leader of the Magyar/Hungarian people who had come from the Ural mountains and settled into the Carpathian basin under Prince Árpád (845-907). His father was Geza, a pagan, who married a Christian woman Sarolta. She had been baptised into the Orthodox Christian faith at her father’s court in Transylvania. When he was born in 975, their son was named Vaik, meaning “true man”. His mother, even though Geza later repudiated her in favour of Adelaide, sister of the duke of Poland, took great care of her son’s early training, and he had excellent Italian and Czech tutors. At Sarolta’s request, St Adelbert, archbishop of Prague, came on a preaching mission to Hungary. In 986 he baptised Geza and his son Vaik, the latter being given the Christian name Istvan (Stephen).

Marriage
When Stephen reached adolescence, Géza convened an assembly which decided that he (Stephen) would follow his father as king. This was contrary to Magyar tribal custom, which gave the right of succession to the eldest close relative. Stephen then married Giselle of Bavaria, the daughter of Henry II, who later became Holy Roman Emperor. Giselle arrived accompanied by German knights.

Succession struggle and a crown
In 997 when Geza died, his paternal uncle Koppány claimed the right of succession and a struggle followed between him and Stephen. 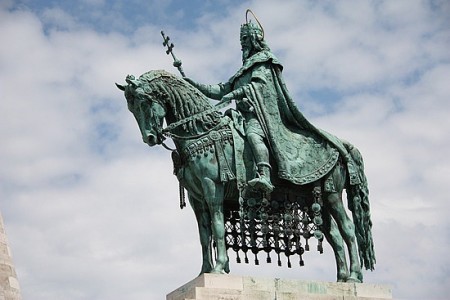 But in a battle near Veszprem, aided by his German knights, Stephen won out. This victory allied Stephen and Hungary with Western Christianity and in recognition of this, the pope of the time, Sylvester II, sent him a crown. From this developed an ideology of the “holy crown”, which favoured the growth of the power of the kingship and of a Catholic culture in Hungary.

Diocesan structures
In return Stephen set up a diocesan structure. Esztergom became an archdiocese and there were dioceses at Veszprém, Gyor, Kalocsa, Vác, Bihar. He also had an Italian bishop from Venice, Gerard (Gellért) Sagredo (later Saint), as a tutor of his son Emeric. Esztergom, on the right bank of the River Danube, is still the primatial see of the Catholic Church in Hungary.

Politics: wars and peace
Stephen allied himself with his brother-in-law, the Emperor Henry II, against Prince Boleslaw I of Poland, but later joined up with Boleslaw in his campaign against the Kievan Rus. In 1018, Stephen led his armies against Bulgaria, in alliance with the Byzantine Emperor Basil II, and collected several relics during his campaign. After the death of Henry II (1024), Stephen broke with the German alliance, because the new Holy Roman Emperor, Conrad II claimed the Kingdom of Hungary. Stephen demanded the Duchy of Bavaria for his son Emeric, who was the nearest relative of the deceased Emperor Henry II. In 1031 they made peace.

His last years
Stephen had intended to retire to a monastery and hand over the kingdom to his son Emeric, but Emeric was wounded in a hunting accident and died in 1031. Stephen lived on amid disturbing disputes over the succession and even an attempt to assassinate him, until he died eventually on the Feast of the Assumption 15th August 1038, committing his kingdom to Our Lady. The disputes continued afterwards too until in 1047 his cousin Andrew I was crowned King of Hungary to re-establish the Árpád dynasty in Hungary.