Stephen, feeling that life had become too easy at Molesme, went with two other monks to Citeaux, and founded a very strict monastery in the wilderness there.

Summary: St Stephen Harding was an Englishman who joined the Benedictines at Molesme in Burgundy and became one of the three founders of the Cistercian Order.

Joins the monastic community of Molesme 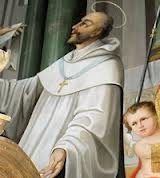 Stephen was born in south-west England and became a pupil of or a monk with the Benedictines of Sherborne Abbey, near Yeovil in Dorset. He seems to have left the monastery and returned to lay life. He then went to study first in Scotland and then in France where he had a conversion experience. He went on pilgrimage to Rome and on his way back joined the Benedictine monastic community of Molesme in Burgundy, France, which had been founded by Robert of Molesme in 1075. 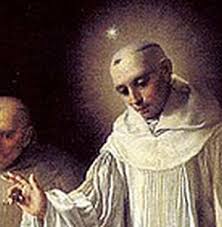 In 1098, feeling along with Robert and another monk Alberic that life had become too easy at Molesme, Stephen went with them to Citeaux (Latin, Cistercium), near Dijon. It was then a place of horror, a vast wilderness. With land given by the lord of nearby Beaune and with permission from the archbishop of Lyon, the three made the new monastic foundation of the Cistercians. Robert was first abbot, Alberic the prior and Stephen the sub-prior. Initially they had to abandon the place because of lack of water, but they soon returned. Alberic succeeded Robert and was abbot for 9 years.

The arrival of Bernard with thirty-one others
In 1109 Stephen took over as the third abbot. It was under his leadership that in the next four years the first cell- or daughter- abbeys of Citeaux were established at La Ferté, Pontigny, Morimond and Clairvaux. In 1113 Bernard arrived at the age of twenty-two with thirty-one companions. This proved a great shot-in-the-arm for the Cistercians. It was Stephen also who introduced lay brothers. They lived in what were called “granges” or “manor houses”, that is, centres of farming estates attached to a monastery to provide food. This also enabled the choir monks devote themselves to public and private prayer, lectio divina and manual work according to the Rule of St Benedict.

Stephen also drew up the Cistercian Constitution, called the Carta Caritatis (“The Charter of Love”), which provided the juridical framework that enabled the Cistercians and similar monastic foundations achieve a permanent place in the Church. The two most important provisions of the Carta Caritatis were the yearly visitation of each abbey by the abbot of the founding house and the yearly assembly of all heads of houses for a general chapter at Citeaux.

Resignation, death and influence
Stephen resigned as abbot in 1133, old and blind. In the years which followed, Cistercian abbeys were established at Waverley, Tintern, Rievaulx and Fountains in England and in 1142 at Mellifont in Ireland. 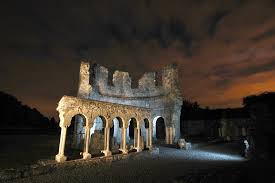 Cistercians in Ireland
Mellifont had six daughter houses in the next ten years at Boyle, Baltinglass, Maigue, and Inishlounaght (Suir) in 1148, Kilbeggan in 1150, and Newry in 1153 and twenty-three by the end of the century.

Trappists: monasteries of men and women in Ireland
In reaction to a relaxation of the rule in many Cistercian monasteries, a reform movement began at La Trappe in Normandy, France, in 1664. Since then most Cistercians are now called Trappists or Order of the Cistercians of the Strict Observance (OCSO). There are five monasteries of men in Ireland at Mount Mellaray, Co Waterford; at Roscrea, Co Tipperary; at Collon (New Mellifornt) in Co Louth; at Bolton Abbey, Co Kildare; and at Portglenone, Co Antrim. There is one monastery of Cistercian women in Ireland – on the banks of the Blackwater River at Glencairn, Co Waterford.