Summary: St Stanislaus Kostka died at the age of seventeen as a Jesuit novice and is the patron saint of novices. Many churches of Polish communities, especially in the United States and Canada are dedicated to him.

Born at the castle of Rostkovo (Poland), the son of a senator, Stanislaus was educated first by a private tutor and then, with his older brother Paul, at the Jesuit college in Vienna. His piety irritated his brother, who bullied and beat him. Stanislaus warned him, “This will end in my running away and not coming back. Then you will have to explain to our father and mother.”

The family tutor who accompanied them did not help matters, and the Lutheran household with whom they lodged would not permit the Blessed Sacrament to be brought to him when he was ill.

Stanislaus remembered having read that those who invoked Saint Barbara never died without the Sacraments, and he prayed that she would help him in his danger. St Barbara, accompanied by two angels, entered his room with the Blessed Sacrament.

A walk to Rome
On his recovery Stanislaus decided to become a Jesuit, but the Austrian provincial did not receive him, because of previous disturbances from outraged fathers.

Stanislaus set out on a 500-mile walk to Rome to put his case before the Jesuit General.

He first went to Dillingen where he met the provincial for Germany, St Peter Canisius, with whom he stayed for a month. Canisius employed the aspirant in a boarding school and tested him by assigning him menial tasks. He then encouraged him to continue his journey to Rome, where some days after his arrival in October 1567 the Jesuit General Francis Borgia admitted him to the novitiate on his seventeenth birthday. Stanislaus did not complete his training. Nine months into his novitiate he again became very sick. Early in the morning on the feast of the Assumption, 1568, he told a priest that he saw Mary surrounded by many angels. And shortly afterward he died. – 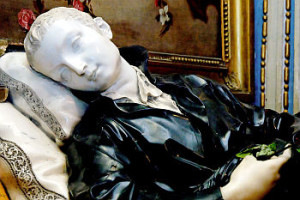 His older brother Paul was sent by his father to demand that his son return home. However, by the time he arrived in Rome, he was overwhelmed by the stories of his brother’s sanctity. Later when he was sixty, Paul himself became a Jesuit also and attended Stanislaus’s beatification ceremony in 1605. Stanislaus was canonised in 1726. He is regarded as the patron saint of novices.