Summary: St Sergius  is the original of the pustiniky or “wilderness men”/”holy hermit” and is regarded as the protecting saint of Russia. He was brought into the Roman Catholic Church Calendar in 1940 through the introduction of a liturgical calendar for Russian Christians in union with Rome (the Uniates). 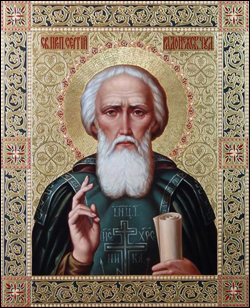 Born in 1315 in Rostov, one of the oldest towns in Russia a hundred miles north-east of Moscow, he was christened Bartholomew. During a military  campaign against Rostov, his parents fled to the village of Radonezh where he grew up in poverty. When he was aged fifteen, his parents died. He and his brother Stefan set up a hermitage and a priest from Kiev dedicated it to the Holy Trinity.

Both lived for a time as pustiniky or “wilderness men”, that is, hermits practising self-discipline and prayer. When his brother went off to a monastery near Moscow, other disciples joined Sergius, each building a hut for himself. Sergius agreed to be their abbot and was ordained priest. Then a disagreement arose: some wanted a totally hermit way of life whereas Sergius wanted to make it more communal. Sergius left to start a monastery and Holy Trinity began to decline. 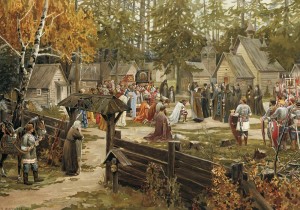 Monastery
Four years later the Metropolitan of Moscow and the monks begged Sergius to return, which he did. The communal monastery thrived and soon Sergius became renowned as a man of wisdom. Although he left no writings, his teaching and the monastic institutions formed Russian spirituality.

Sergius and the she bear (Russia)

Death and influence
In 1392, Sergius became ill for the first time in his life and sensed it was time for him to die. He was buried in the principal church of his Holy Trinity monastery. He is a prime example of the pustiniky, or “wilderness men”, who by their prayer and self-discipline built up Russian spirituality and helped restore Russian society after the Tartar invasions.