Summary: St Senan, Bishop, was born near Kilrush, County Clare. His family were prosperous farmers. His vocation seems to have resulted from an experience of danger from the sea. His early studies were mainly made at the monastery of Kilnamanagh. His principal monastic foundation was on Scattery Island, near Kilrush, in the Shannon Estuary. He was anamchara to Ciaran of Clonmacnois and Brendan, and died in 544.

St Senan is associated especially with Scattery Island or Inis Cathaigh, in the estuary of the River Shannon near Kilrush, Co Clare.

Patrick Duffy gathers stories about his life from different sources.

Early life
Senan’s reputed birth-place was Moylough, about four miles east of Kilrush, Co. Clare. He received his first monastic formation locally on the peninsula of West Clare from the abbot Cassidan. He then went to the monastery of St Natalis at Kilnamanagh in Ossory. After he had acquired a reputation for holiness, Natalis sent him  to make his own foundations. He went first to a green island in the River Slaney called Iniscoirithe, (the present Enniscorthy) where he had a cell. Today the parish on the east side of the River Slaney in the town of Enniscorthy (Temple-shannon = “Senan’s church”) is dedicated to him. 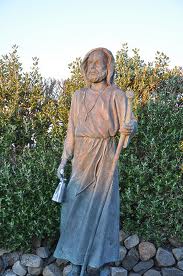 Senan then went on pilgrimage to Rome and on his return journey is said to have visited the shrine of St. Martin of Tours and the abbot David at Menevia. He may have been consecrated bishop before he returned to Ireland. On his return he had a church at Iniscarra near Ballincollig, Co Cork, where there is still a St Senan’s church today. He was already advanced in years when he came home to West Clare to establish his monastery on Scattery Island, then Inis Cathaigh.

Battling the monster: The Cathach of Inish Cathaigh
Cathach, means “the battler”: here it refers to a monster or péist which inhabited the island and terrorised people. When Senan arrived on the island, the Archangel Michael led him to the highest hill where Senan was able to locate the Cathach. He faced the monster and ordered it to depart from the island, which it did, but not without a struggle. A local chief hired a druid to put a spell on the saint, but when the druid landed on a nearby island, a tidal wave enveloped him and swept him to his death. That smaller island is still pointed out as Carraig an Draoi or The Druid’s Rock, which can still be seen at low tide. Some say that this cathach was the river god of the Shannon, whose powers now became invested in Senan – thus explaining his name and some of the miracles associated with him.

His visitors
Senan’s reputation spread far and wide. Brendan of Birr and Kieran of Clonmacnois came to visit him for spiritual direction. And from far-away Bantry a holy woman named Cannera resolved to visit this holy spot and, if possible end her days there. When she arrived she found that a strict rule forbade any female to enter the place, so despite her appeals she had to stay by the shore. Some say she languished there and died: others that she spoke up to Senan and said: ‘Women can enter the kingdom of heaven no less than men’ and that he let her stay. 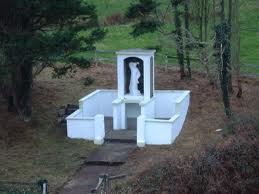 Killeochaille
Senan is not to be easily dismissed as a misogynist. It was he who actually set up the first convent of nuns in West Clare when he gave the veil of religious life to the daughters of Naereus and established them in a place called Killeochaille (Kill-na-cailleach, ‘the church of the nuns’), in nearby Querrin.

His death and feast
Before his death Senan decided to visit and pray at the cell of the abbot Cassidan, who had directed his first steps as a monk. As he made his way home and was passing Killeochaille he was taken ill. A voice seemed to say: “Servant of God, you are being called to heaven”. His companions carried him home and he died on the feast of St David in 544. They spent eight days mourning him, so his feast is on 8th March.

Other Senans
There are many other Senans listed in Irish calendars (See Pádraig Ó Riain, A Dictionary of Irish Saints 2011, 557-560), as well as one linked with a parish in Land’s End, Cornwall, England.