Samson of Dol is one of the seven founder saints of Brittany, most of them setting out in the sixth century from from Wales. They crossed over first to Cornwall, where many also made foundations, and then sailed on to Brittany. Samson appears powerfully in Shaun Davey’s musical suite celebrating the wandering of Celtic monks, The Pilgrim, as Samson peccator episcopus.

Patrick Duffy tells the story of this saint. 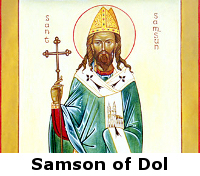 Samson of Dol (died c. 565) is one of many saints of Welsh origin in the 6th century – others were Paulinus, Austell and Mean – who spent time in Cornwall on their way to Brittany. They seem to have shared the same spirit of “wandering for Christ” that the Irish monks such as Colmcille and Columbanus had of leaving their homeland going into exile for Christ – peregrini pro Christo, or “pilgrims for Christ”.

Educated by St Illtud
Samson was of noble birth: his father was from Dyfed and his mother from Gwent. His parents placed him under the care of Saint Illtud, and he grew up in the monastery at Llaniltud Fawr. He was ordained priest by St Dubricius in 531. Dubricius wanted Samson to succeed him as abbot of Llaniltud Fawr, but Illtud’s nephews, who were also monks in the same monastery, became envious of him and in the face of their hostility he left the monastery.

Caldey Island
Samson retired first to the island monastery of Caldey off the coast of Dyfed (Pembrokeshire), and became abbot there. But it was not a happy move as his predecessor, Pyr, had left Caldey in such a lax state that he was unable to control the monks and re-establish discipline.

Ireland
Samson left there also and went to Ireland, where he reformed a monastery, thought to be a religious house at Howth.

Cornwall
Samson then joined a party of Welsh churchmen including Paulinus, Austell and Mean who were going to Cornwall on their way to Brittany. Because of his reputation as a monastic reformer, a monk named Winniavus was dispatched to tell him tactfully that they would prefer that he went somewhere else.

Scilly Isles and Guernsey
Samson took the hint, and moved on to spend some time in the Scilly Isles, where an island now uninhabited – Samson – is named after him, and in Guernsey, where St Samson is the second port of the island. He then moved on to found his main monastery near Dol in Brittany. 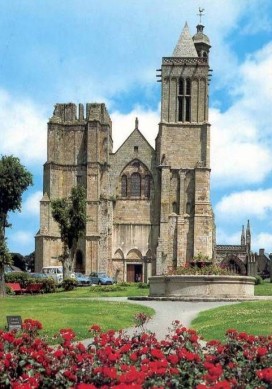 Dol in Brittany
Dol was then an island on flat marshlands, though the coastline has changed, and it is now about eight kilometres inland. Mont Dol, a large flat-topped rock, had been the site of druidic sacrifices, and Samson made that his hermitage. The image shown above is of the altar of the Church of Saint Samson in Dol-de-Bretagne.

At the royal Frankish court in Paris
Samson is said to have made a journey to the royal Frankish court in Paris to plead for Judual, king of Brittany, who was detained there by King Childebert I. Here a series of incidents, in which the queen imposed some bizarre trials and eventually tried to poison the saint ended, when the king released Judual and granted him land for his monastery at Dol.

Samson peccator episcopus
Samson may have had quite close relations with the Frankish clergy. He is probably the Samson peccator episcopus who signed the acts of an episcopal council in Paris in 557. He is described in Breton accounts as archbishop of Dol. Motifs similar to those in the Lives of other saints, such as a dove perching on his shoulder at ordination and he capturing a dragon with his stole and throwing it over a cliff, symbolically proclaim the importance of his mission and the reverence in which he was held by his successors.

Tidal wave in 709
Dol was overwhelmed by a catastrophic tidal wave in 709, and there is now no trace of the monastery. Samson’s relics were taken to Canterbury and Ely in the time of King Athelstan of Wessex (895 –939).

Shaun Davey’s musical suite entitled ‘The Pilgrim’
In Shaun Davey’s musical suite entitled ‘The Pilgrim’ for Celtic soloists and orchestra with pipeband and choir. One of the items consists of a narrator recounting the journey of St Samson across Cornwall and the repeated beating out by the choir of the refrain Samson peccator episcopus. It evokes the swashbuckling and bravura character of the Celtic wanderers for Christ of the 6th century.

On Padstow sand
the tide has fallen back
Fine horses pull
an Irish chariot from the shallows.

Holy men from Wales
walk in this sunlight
and leave the tide race
far to the West.

On the Isthmus road
the Bishop’s Chariot
pulled by piebald horses
from the sea.

On the Isthmus road
the Gentle Bishop
pulled by piebald horses
from the sea.

High on Cornwall
many travellers have gathered
to celebrate power over natural things.

On the Isthmus road
the Bishop’s chariot
Pulled by fine horses
to the sea.

On the Isthmus road
there came a miracle
a sacred cross
cut into stone by a bishop’s staff.
Round Land’s End
the waves collect and tumble
pushed by wind and tide
into tumultuous fury.