Summary: Saint Robert of Molesme (c. 1028 – 1111) was a Christian saint and abbot, one of the founders of the Cistercian Order in France. Patrick Duffy reviews his life. Early life as a monk  Robert was a member of the nobility in Champagne, a younger son, who entered the abbey of Montier-la-Celle, near Troyes, […]

Summary: Saint Robert of Molesme (c. 1028 – 1111) was a Christian saint and abbot, one of the founders of the Cistercian Order in France. 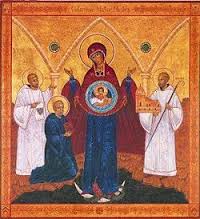 Robert was a member of the nobility in Champagne, a younger son, who entered the abbey of Montier-la-Celle, near Troyes, at the age of fifteen and later became prior.The image (left)<<< shows Robert of Molesme, Alberic and Stephen Harding venerating an image of Mary.

He was made the abbot of Saint Michel-de-Tonnerre soon after the year 1060, but he was unable to reform the abbey, which had become known for its laxity, and so he returned to Montier-la-Celle.

Founding of Molesme
Some hermits living in the forest of Colan sought Robert out there and asked to be put together under his direction in a new monastery. He got the permission of Pope Gregory VII to found a monastery at Molesme in Burgundy in 1075. At first, they had only huts made of branches surrounding a chapel dedicated to the Holy Trinity in the forest. Molesme Abbey quickly became known for its piety and sanctity, and Robert’s reputation as a saintly man grew. But when the house grew wealthy, new, unsuitable monks came to the area and divided the brothers, challenging Robert’s severity. Robert twice tried to leave Molesme and was ordered back by the Pope. 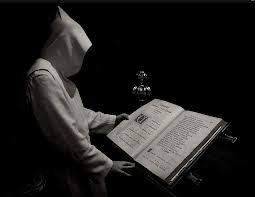 Founding of Citeaux
However, in 1098 Robert and several of his monks left Molesme with the intention of never returning. Renaud, the viscount of Beaune, owned a desolate valley in a deep forest, which he gave to Robert and his companions, and thus they founded the Cistercians. Cistercium is the Latin name for the village of Cîteaux, near Dijon in eastern France, where they made their foundation. Stephen Harding and Saint Alberic, two of Robert’s monks from Molesme, were pivotal in founding the new house, as Robert ended up staying for only a year.

Return to Molesme
In 1100, the monks of Molesme asked Robert to return and they agreed to submit entirely to his interpretation of the Rule of St. Benedict. He did return and ran the monastery according to his own interpretation and example. Molesme became a major center for the Benedictines under his leadership. 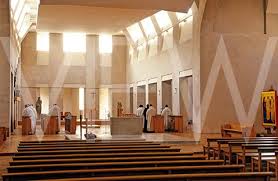 Citeaux continues
Meanwhile, the monastery at Cîteaux, under the direction of Alberic, and especially Stephen Harding, became the cornerstone for the new Cistercian Order, which grew to greater fame in the 12th century when Bernard of Clairvaux arrived with thirty-five of his relatives and friends to join the monastery.

Death and canonisation
Robert continued at Molesme until he died in 1111. Pope Honorius III canonised him in 1220.