Summary: St Pancras, Martyr; died in Rome, probably in 304, martyred under the emperor Diocletian. By tradition a teenager. Buried on this day in the cemetery of Octavilla. Widely venerated in Rome and elsewhere.

Pancras was a 14-year old boy martyred in Rome, where there is a church in his honour. But he is probably better known from the church of that name in London and the nearby railway station. Saints Nereus and Achilleus have a 4th century basilica dedicated to them close to the Baths of Caracalla in Rome.

Patrick Duffy looks at what is known about these three saints.

St Pancras
The legend of Saint Pancras claims that he was a fourteen year old boy from Phrygia brought to Rome by his uncle. Both were converted to Christianity and were put to death in Rome for refusing to sacrifice to the Roman gods during the persecutions of the emperor Diocletian. A church was built on the site near the Via Aurelia Antica, where a basilica was built by Pope Symmachus (498-514). With various changes over the centuries there has been a church and catacomb in the same place right up to that of today. 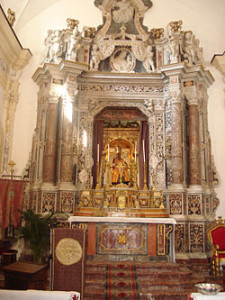 Church of San Pancrazio, Taormina. The altar, which contains a statue of Saint Pancras.

Relics to England
When Pope Gregory the Great sent Augustine to England in 597 he gave him relics of Saint Pancras and today in London his name is attached to a prominent and beautiful classical church there as well as with the surrounding area (and the railway station for the Eurostar!). Pancras features as a literary figure with some changes in Cardinal Nicholas Wiseman’s novel Fabiola, as the gentle antagonist of the villain Corvinus.

Inscription of Pope St Damasus
A fourth century inscription of Pope St Damasus (366-384) tells that Nereus and Achilleus were 2nd century soldiers used to executing through fear the orders of the emperor – possibly Domitian (81-96 AD), that they were suddenly converted to Christianity and then became pacifists. As a result of this they were martyred. 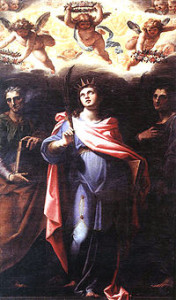 Domitilla, with Saints Nereus and Achilleus, by Niccolò Circignan

They were buried in the cemetery (catacomb) of Domitilla on the Via Ardeatina just outside Rome. Their basilica is near the Baths of Caracalla in Rome.